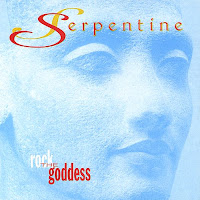 SERPENTINE ARBORVITAE
Rock The Goddess
Infinite Domain Music
Country of origin: USA
Genre: Pop, Darkwave, Electronic, New Age, World
Release Date: 1995
This full length release is twenty-plus years old, but I was struck with a sudden urge to listen to it again. Considering my long-standing dedication to extreme metal you wouldn’t expect me to appreciate stuff like this. Well think again because this rare underground gem has sustained a profound impact on me. I first heard Rock The Goddess when I began visiting Manhattan’s pagan community around the time it was released. I was so engrossed I made a point of catching local performances whenever I heard she was playing. From 1993 to 2008 she released a series of self-produced albums recorded with various musicians besides a best of compilation. Her shows were always captivating and what she released on CD was not like anything I had heard previously. Each of her recordings sounded different from the last, in direct contrast to the formulaic rehashed pop of the Spice Girls and Britney Spears that has dominated radio since 2000. There is a need for artists like this to challenge existing standards while creating something truly multicultural and timeless, not packaged as such by corporations. This is not to say her recording career is unsung, as she has performed major events across the U.S. and is also an accomplished jazz singer. Listening to Rock The Goddess is like being transported into a centuries-old world that you find is still vibrant and alive once you cross the veil from the modern world. A world where the lines between past and present are blurred to the point of nonexistence, along with the divisions between cultures and religious beliefs. It’s hard to pin down any one song that does this the most convincingly, as they all add up to the big picture so to speak. What I can say is that you can write a song with keyboards, guitars, traditional instruments and elements of Celtic and Mediterranean music, and make it work. Rock The Goddess throws the rulebook out the window and starts from scratch. To this day it holds up as testimony that there are no guidelines a musician has to follow to leave a lasting impression. Rock The Goddess is available on several internet outlets including Amazon, iTunes, All Music and CD Baby and can be streamed at Youtube Topic. -Dave Wolff