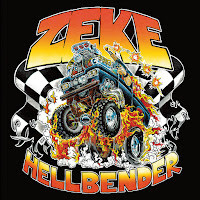 ZEKE
Hellbender
Relapse Records
Country of origin: USA
Genre: Punk, hardcore
Release date: March 30, 2018
The first time I heard of Zeke was when I watched a live clip from the 1998 documentary Kurt & Courtney (by Nick Broomfield). This clip was part of a larger sequence exploring the Seattle punk and indie rock scenes where Nirvana came from (and also featured The Dwarves). The song was 302 Cubic Inch V8 Powered Blues and it instantly converted me to fandom with its speed, rawness, acuteness and earnestness. It would be years before I heard them again as they went on a hiatus of fourteen years after releasing ‘Til The Livin’ End on Relapse Records in 2004. It’s now 2018 and Hellbender marks the band’s triumphant return to the scene; indeed it seems as if the band never left. This full length is succinctly described as being “short, fast, loud, and to the fuckin' point.” This is wholly indicative of Zeke’s style, the exact opposite of what alternative and grunge was hornswoggled into converting into. If there was ever a band to make blues rock sound aggressive, this is it. Conceive the possibility of what Motorhead crossed over with the Ramones would sound like when impregnated with the acceleration and vitality of classic hardcore. Now remember to buy the album when it comes out. This is a must own for those who want punk denuded of subtleties, complete with an adventurous spirit that makes Born To Be Wild sound like Justin Bieber. Yes I am that engrossed in this album. The fifteen tracks included assail you with near-barbaric force and the energy they generate remains diligent right to the end. Jack Endino knew full well what he was doing when he produced this; his experience with The Accused, Nirvana and High On Fire shows him as a force to reckon with, lesser known or not. The material shows Zeke as a band that commands attention; having been able to retain this passion since their first performances in 1993 is no minor feat. Not since Corrosion Of Conformity released Eye For An Eye in 1984 has there been a punk album with such unrelenting conviction. Tneir finest moments here include All The Way, On The Road, County Jail, Goin’ Down, AR-15 and Ride On. Check out these songs’ manic vocals and blazing leads and see for yourself. You can read tour updates for the band on their Facebook page and Relapse’s official site. By the way the front cover artwork was designed by Hollis Tucker and Lee Goode. -Dave Wolff