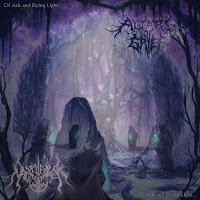 NACHTTERROR/ALTARS OF GRIEF
Of Ash and Dying Light
Hypnotic Dirge Records
Country of origin: (Nachtterror) Canada, Altars Of Grief (Canada)
Genre: (Nachtterror) Blackened doom metal, (Altars of Grief) Blackened doom/death metal
Release date: July 10, 2015
I’ve been listening to this digital promo since last week and I can’t say if I like it or I hate it. Two black/doom bands from Canada joined forces for this 10” vinyl split. Both have great compositions, but it seems like I’m getting too old to appreciate young perspectives. On one side we have Nachtterror, a black/doom metal band a bit drowned in melody, with obvious references to mainstream bands from north Europe, with keyboards and modern structures here and there. On this split the band included two pieces of dark art, very solid and complex. But I have to say it’s nothing I haven’t heard before. The second track “Upon Ashen Shores” is my favorite. It has moments of ambient music, savage blast, ominous distortion and guttural vocals. The digital version on Bandcamp contains two bonus songs. Not bad, but is not the kind of black/doom metal music I’m used to.
On the other hand there is another black/doom metal horde more into Funeral Doom Metal, with roots in progressive and ambient music. These young musicians have great compositions with slow lines, atmospheric keyboards, soft distortion under soft guitars, and clean vocals. Maybe this has forged a personality to the band, and maybe it’s a peculiar perspective of extreme metal music, but definitely I’m not a fan of this. I admit all compositions are great, and it seems like the band has roots in dark music. They include a cover of “Room Of Angel” by Akira Yamaoka (the Japanese composer behind Silent Hill’s soundtrack). They’re an interesting band, and I admit they moved my radar from time to time. But I’m not into this kind of black/doom metal metal, so I can’t recommend it. Sorry! -Victor Varas