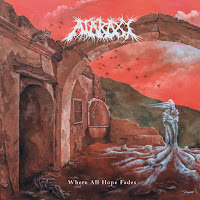 ATARAXY
Where All Hope Fades
Dark Descent Records (USA)
Me Saco Un Ojo Records (UK)
Country of origin: Spain
Genre: Atmospheric death/doom metal
Release date: February 16, 2018 (Dark Descent Records), January 5, 2018 (Me Saco Un Ojo Records)
Oh man! If Ataraxy’s previous album, 2012’s “Revelations Of The Ethereal”, is a kick in your balls of slow, aggressive, stinky and hideous death metal, on their new production the band pass the threshold of darkness and doom. Coming from Zaragoza, Spain, Ataraxy is a band forged in abyssal tunes and atmospheric guitar riffs with hypnotic sections. This album sounds incredible, dark and poisonous, as all its tracks reveal distinctive, oppressive death metal. As part of a new generation of death/doom entities from Europe, Ataraxy have certainly completed a great album with long tracks, open chords and musical arrangements which denote high skills from all the musicians involved. You can feel a particular painful atmosphere in every single note. This is not a standard death metal band playing known riffs and childish lines. The band take you into an exploration of the most recondite doom metal, with evil distortions, psychotic lines and the most sinister atmosphere I’ve heard from abyssal-doom bands. Of course, this is heavy (literally) and it’s hard to digest, as all the tracks are complex and dense. My favorite is the last one: “The Blackness Of Eternal Night”, a twelve minute opus of opiate atmospheres in different sections, like the descriptive soundtrack of a horror movie. It’s a great album you can’t miss if you are into doom and death metal, if you are curious of new sounds. -Victor Varas

Track list:
1. The Absurdity of a Whole Cosmos
2. A Matter Lost in Time
3. One Last Certainty
4. As Uembras d'o Hibierno
5. The Mourning Path
6. The Blackness of Eternal Night