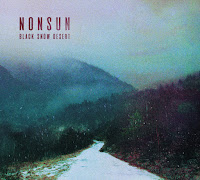 NONSUN
Black Snow Desert (2018 Edition)
Cimmerian Shade Recordings (CD, digital)
Dunk!Records (vinyl)
Country of origin: Ukraine
Genre: Ambient, experimental, doom, drone
Mixing: Jannes van Rossom, Deaftone Studios
Mastering: Tobias Stieler
Photography, design and layout: Samantha Muljat
Release date: January 25, 2018
The Ukraine’s Nonsun has infinite confidence in Black Snow Desert, considering how much they’ve been promoting its rerelease. This full length was first released on digital format in January 2016 and reportedly received accolades from zines, magazines and webzines, as well as a huge part of their target audience. Metal Bandcamp and Cvlt Nation raved about what they respectively referred to as its intoxicating mysticism and overwhelming despair, and were quite verbose about it. The favorable response inspired Nonsun to expand their reach with a second edition of Black Snow Desert on vinyl, CD, digital and streaming on Soundcloud and Bandcamp. The band even go so far as to quote a classic Black Sabbath song describing their material as “the music from behind the wall of sleep. And it doesn't matter on which side you are while listening to it.” Black Snow Desert is a world of infinite emptiness, and instead of drawing you in, it finds you in the middle of its uninhabited, godforsaken solitude. A forgotten world where not even the concepts of good and evil exist, if you can imagine such a place. Black Snow Desert was remixed and remastered from its original form, with new cover art by Samantha Muljat who has worked with Earth, Goatsnake, Pelican and Today Is The Day. This is one of those albums you should hear late at night with the lights off, so you’re in a proper frame of mind. You also need extreme resolution to give it your complete attention, as three tracks of epic length are included with three seven-minute compositions. The longest track (No Pity for the Beast , No Shelter for the Innocent) is over fifteen minutes in length, laced with minimal noise effects, moments of silence like physical mortality and a haunting, despondent air that steadily grows on you. This track alone makes Black Snow Desert worth a listen as it could have been extended into thirty minutes if the band was inclined to lengthen it. But there is more to the journey. Droning noise is the backdrop and an elegant embodiment of the vast landscapes in their home country. While black metal bands have recorded impressive sonic depiction of the landscapes of their respective countries, Nonsun have potential to surpass much of what has been done before. The minimalism is complemented by the repetitive guitars of Goatooth, the non-imposing bass of Oleksandr Kostko and what sounds like barely audible electronic sounds in the background. Drummer Alpha further stretches the confines of Black Snow Desert with sporadic fills somewhat calling King Crimson to mind. Within all this darkness is unsurmountable beauty, something the band have taken great pains to present their material with. It’s there to be discovered if you’re observant enough to look. -Dave Wolff

Track list:
1. No Pity for the Beast, No Shelter for the Innocent
2. Ashes of Light, Demons of Justice
3. Peace of Decay, Joy of Collapse
4. Heart's Heavy Burden
5. Observing the Absurd
6. Rest of Tragedy