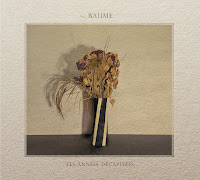 BAUME
Les Années Décapitées
Independent
Country of origin: France
Genre: Experimental rock/black metal
Recorded and mixed by Baume
Artwork by Baume
Illustration by Laurene Hamery
Release date: March 2, 2016
Baume is a new project fronted by the French musician Gaetan Juif, also of Cepheide, Rance and the solo project Scaphandre. I don’t know how he finds time to keep up such a level of activity, but somehow he manages while consistently spawning quality extreme music. If you’ve been listening to those bands and projects, you’ll likely hear shades of them on Baume’s debut CD Les Années Décapitées, but there are also differences to note. As he does for Scaphandre, Juif is primarily doing Baume as a solo undertaking, making for a clear and undiluted representation of the deepest, darkest regions of his mind. He describes Les Années Décapitées as being experimental rock and black metal. Personally I think he could have been referring to the experimental progressive rock of the 70s as you can hear some of it if you listen closely enough. Still, many listeners would consider this a black metal album that’s not for everybody. It’s the sort of album you’ll appreciate if you’re into minimalist black metal teeming abundantly with ambience. Or if you’re into Filosofem-era Burzum and The Forest Is My Throne-era Satyricon. The compositions place a great deal of emphasis on atmosphere, and the results are mind-blowingly horrifying. Rather than endless snowfalls or demonic entities charging out of the forest, the destructive, murderous onslaught of this recording is likened to torrential rains, hurricanes, typhoons and a massive tornado swallowing the earth whole. I gradually formed this analogy but the more I listen the more it fits. To form your own analogy you need to give Les Années Décapitées your undivided attention all the way through. It’s roughly 33 minutes in length, so if you prefer shorter releases it doesn’t present an overabundance of material. Juif’s lyrics are sung with horrid, agonized shrieks impressing upon you the essence of civilization perishing under the apocalyptic storms I described. The spoken passages of guest vocalist Laurene Hamery are extremely chilling alongside Juif’s vocals. This dual approach with the backing musicianship has to be heard to be believed, and is most profound if you listen during a rainstorm. A host of other sounds and vocal styles are experimented with. Placed in their proper context they all have a part in contributing to the overall theme. I liked the addition of piano to complement the clean guitars in ‘IV.Une Ballade d'Amour et de Mort.’ The only grievance I had with this album is the final mix should have had more bass guitar for additional depth. But the material generally stands on its own and as Brian of Metal Revolution said you don’t need a comprehension of French to appreciate the images put across to you. -Dave Wolff