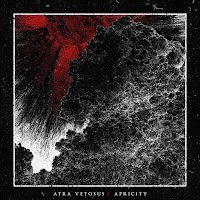 ATRA VETOSUS
Apricity
Immortal Frost Productions (Belgium)
Place of origin: Launceston, Tasmania, Australia
Genre: Melodic black metal
Jewel Case CD with 8 page booklet limited to 1000 copies.
Digipack CD with 8 page booklet limited to 500 copies.
12" Gatefold Double Vinyl with exclusive A2 poster limited to 300 copies.
Release date: February 26, 2018
Even though I’m a year older, when I listen to this I’m still in my mid-twenties. Apricity is Atra Vetosus’ second full length and the follow up to their 2013 album Voices From The Eternal Night and 2016 live album Live At The Royal Oak (for which a video was released in 2018). The Australia band exhibits black metal’s aesthetic advancements from 1997 to ‘99, supplementing it with atmosphere, strings, keyboards, different vocal styles and - surprise, surprise - a brighter edge than you would expect. For a sophomore release it shows purposeful resoluteness to fulfill the black metal genre’s dramatic potential, its potential to diversify without losing touch with its purpose to redefine musical boundaries, as many bands do. That bright edge doesn’t negate this band’s exploration of nature’s bleaker aspects. Listening to it is appropriate for the weather in Long Island. It’s still cold outside and I see winter’s last vestiges through my window. I got the same feeling from the first track of Necrophagia’s Season Of The Dead. Only Atra Vetosus personifies the winter following the autumn Necrophagia called to mind. I can’t get over the instrumentation and the arrangements here. The components are well known in black, folk and Viking metal, but their presentation transcends the familiarity with seemingly countless divergent turns. Atra Verosus take a few theatrical liberties, as in the lead in to Ever Falling Snow. You only hear trudging in a frozen landscape, but you are free to envision who is on this journey and how long it has lasted. The songwriting and vocals capture the essence of the world the nameless traveler is journeying in. The contrast between his isolation and vast surroundings is profound when you experience the epic scope of this song. The acoustic section of Oceans Of Light, Rainfall Of Stars is given an equally profound sense of darkness by a foreboding keyboard effect, and the explosion of sound when the other instruments kick in is like the world beginning. In every song there are so many different themes written in to narrate each tale the songs represent. This as much as the length of the songs is where the band’s epic qualities come from. This abundance in moods is always done tastefully and they don’t reek of overindulgence. Check out Where The Lost Spirits Roam, Of Ancient Prophecies and Pravitatem Cordis Hominis. The instrumentals Violet and Amber consist of acoustic guitars and are as captivating as the rest of this album despite their shorter duration. These pieces have a mournful disposition placing the other songs into a perspective of their tales having taken place eons ago. All this makes for a stunning release that is visceral and cerebral in equal quantities, and one you should make time to listen to. -Dave Wolff