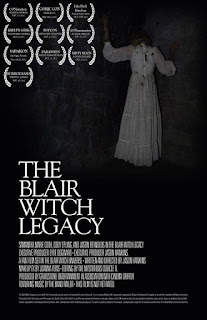 The Blair Witch Legacy
Written and directed by Jason Hawkins
Starring Samantha Marie Cook, Cody Epling and Jason Reynolds
Release date: March 1, 2018
Available for streaming at Kings Of Horror
All the hype, backlash and differences of opinion surrounding it notwithstanding, 1999’s The Blair Witch Project was the movie that got me into independent films. In the 90s I was looking for something different when it came to moviemaking. Thanks to this small endeavor and the indie productions I saw afterward, my mind was opened to many different somethings.