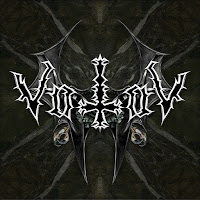 VOTOV
Votov
Independent
Place of origin: Winnipeg, Manitoba, Canada
Genre: Old school death metal
Streaming on Soundcloud and Bandcamp
Release date: December 20, 2017
Votov’s 2017 debut full length first impressed me as having notable influence from Samael and Obituary. The opener The Smear has crunch and groove similar to Samael’s Throne Of Baphomet, without additional atmosphere. The primal theme and lyrics strike me as reflecting the constant bickering and arguing on social media, when it gives us an opportunity to share information and knowledge. As people have pointed out it becomes a forum for petty conflict and gaslighting which contributes to the dumbing down of the masses. I find most of the lyrics critique the stagnation that results from said conflict, much like that of spin media about which celebrity is getting divorced this week, “fake news” and other scandals that distract public attention from real problems we face each day. The dystopia is here and most people aren’t even aware of it. Listen to the spoken word CDs of Jello Biafra and watch the movies of Eric Bogosian and you’ll see what I’m saying. Popular media is eroding our ability to think critically, making us all mindless observers, and this is the point I believe the band is making. Or their point could be something else entirely. Either way, the lyrics address the issues of concern to them, not bothering to candy-coat them or gloss them over. The compositions they are set to present themselves as a preamble to what the band has to say, furnishing a stable backdrop. Memorable death metal bands have always arranged their songs in this way, utilizing their musicianship to make their point about self-perpetuating and self-defeating corruption, and Votov is off to a good start at following suit, making heaviness and mid-tempo groove the vehicle for their ideas. They complete their ritual with a rendition of Celtic Frost’s Dethroned Emperor, likely one the most covered songs in the history of death metal, but here it reinforces the unifying concept of their original songs and make you want to read more in the process. Contact the band and acquire a copy of this album. -Dave Wolff