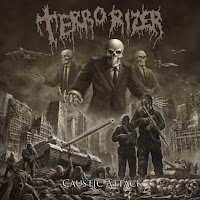 TERRORIZER
Caustic Attack
The End Records
Place of origin: USA
Genre: Grindcore
Produced by Jason Suecof, Audiohammer Studios, Sanford, Florida
Cover art by Timbul Cahyono
To be released on CD, LP and digital format October 12, 2018
Pre-orders available here.
The mighty Terrorizer, America’s Napalm Death, the band that placed grindcore on the Stateside map with 1989’s World Downfall, is prepared to release their first full length in six years. Since World Downfall they’ve recorded a minimal amount of follow ups (Darker Days Ahead, Hordes Of Zombies); likely a plus as Caustic Attack shows them as hungry as in the late ‘80s. Hiring new members to complete the lineup may also have had something to do with it. The band’s current roster is vocalist/bassist Sam Molina and guitarist Lee Harrison joining mainstay drummer Pete Sandoval (also of Morbid Angel). Molina and Harrison’s track records include Monstrosity and Malevolent Creation, which gives the material on Caustic Attack the advantage of experience from playing with established death metal bands. Note that Sandoval was in Terrorizer before joining Morbid Angel, and his time recording with Terrorizer was in between breaks from recording with Morbid Angel. This accounts for the sporadic releases of his first band, but it’s admittedly hard not to hand it to him for sticking with his first job from the beginning. His work on Caustic Attack is extravagant, unrelenting and brutal as ever. Not bad for a drummer who had to undergo invasive back surgery after years of working with Morbid Angel (the demands of playing in a death metal band are always underrated). The arrival of new blood into re-establishes their ability to devastate everything in their path in the early twenty-first century. In fact, tracks like Turbulence, Conflict And Despair, Infiltration, Trench Of Corruption, Poison Gas Tsunami and Wasteland surpass what I remember hearing from them on previous releases, with few if any flaws to speak of. Maybe I went into this not expecting flaws (I said maybe). But I listened to this several times and heard no filler cuts or moments of tapering off on the band’s part. Every song personifies the fire of classic grindcore and the professionalism death metal has built to this day, even after six years of inactivity, Caustic Attack is dynamic, impassioned and a must have for GB and DM fans. Get this when it comes out. -Dave Wolff