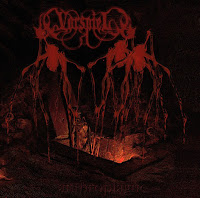 Band: Vorspiel
Location: Kinston, North Carolina
Country: USA
Genre: Atmospheric doom/death/black metal
Demo: anthroplague
Label: Slorebs Castle Records
Format: Streaming
Release date: August 17, 2019
Vorspiel’s demo “anthroplague” is plainly one of 2019’s most tenebrous releases. An acquired taste but all the more rewarding if you have the endurance to listen all the way through. That this demo was recorded in the year’s brightest season doesn’t negate its coarse, crude nihilism. If you’re looking for a recording furnished by state-of-the-art equipment you’d best look elsewhere, because what you get here is something closer to the bastard offspring of old Beherit and Abruptum (with less physical torture and more over the top discord). To fully experience and appreciate this demo’s nightmarish darkness maximum volume is required. The resulting vibes won’t crush your skull or cave your chest in as much as dissolve your body like radiation sickness. Vorspiel is brought to you by solo musician Hudson, the creative impulse of Beastial Piglord whose album “Sunder:” was reviewed here last month. If you found Beastial Piglord musically irrational and disordered, Hudson draws from a far deeper well. Although “anthroplague” has the traditional themes of early 90s/second wave black metal, being deliberately anti-modern, recorded with the analog equipment of the time and intentionally under produced, it’s not meant to be black metal in the traditional sense. It’s described as more eerie and sinister, with traces of atmospheric doom/death metal added. “anthroplague” goes all out to display distortion and atmosphere as the sonic equivalent of Leviathan or a Lovecraftian demon rising from the deepest ocean to reclaim the world after ages of slumber. Hudson likens it more to a cave leading to hell itself, from where the howls of the damned can be heard. This is manifested by vocals so guttural and menacing it sends chills through your brain not unlike those generated by the late Tony Sarkka on “Obscuritatem Advoco Amplectere Me” and other Abruptum classics. Single keyboard notes and subtle ethereal and unearthly effects to enhance the raw atmosphere with a chilling effect that is almost completely inhuman in its persistence. If ever there was a soundtrack to eternal damnation, this has to be it. Vorspiel’s newest recording “Abhorrence” was just released a few days ago so check that out also. -Dave Wolff