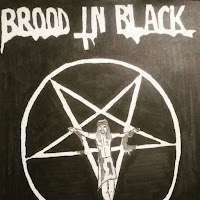 Band: Brood In Black
Location: Lancaster, Kentucky
Country: USA
Genre: Black/thrash metal
EP: Unholy Infernal Rites
Label: Blasfemas Records
Format: Digital, streaming
Release date: June 13, 2019
When you think of Kentucky, USA, black metal does not usually spring to mind, however, an evil entity Brood In Black seeps from the darkest corners of such a place, and is creating raw, primitive and traditional evil black metal! It is extremely evident, that Count Cor'inth and Master of Graveyard Torment, the duo behind Brood In Black are waging total war on Christianity and mankind, "the two biggest plagues on planet earth".
Brood In Black's 2019 EP release “Unholy Infernal Rites” is a sinister and abrasive listen, sure to satisfy the thirst for powerful and ungodly old school black metal!
As you start the EP you will be confronted with beastly and inhuman lo-fi sounds of the intro track “Rise, Father Satan”, which strongly sets the foundation for the baleful ride the listener is destined to endure.
The title track “Unholy Infernal Rites” is a sordid smash of unrelenting and distorted metal and is full of disdain as Count Cor'inth hisses and spits the lyrics "God is dead! Christ is dead! Christianity is dead!” with such conviction and disturbing technique. The production of this track propelled my imagination into a dingy underground bar, full of like-minded black metalheads embracing the evil with exultance.
“Angelsodomy” provides the dense sounds of the old school and feels impeccably rotten. This track is a deadly and solid effort with more punk style beats over those initial blasts, before it all caves into a big mess of filth and decay of true shocking black metal bliss. This track was me, this is where it was at! What a dark, brooding and threatening number.
The creation of a menacing ambiance is truly present in “Curse Of Torment” as the fury within this track is hurled at you with an underproduced intensity and disfigurement that only this style of malicious black metal can emit.
The EP is complete with covers of Beherit’s “Gates Of Nanna” and Hellhammer's “Messiah”, both done rather well with Brood Of Black’s own unique stain on these well-known and infamous tracks. This EP is extremely pro Satan, misanthropic, cold in its delivery and icy and harsh in its sound. Brood In Black have produced a great old school black metal listen loaded with a vocal style soiled with murky and lewd tones, reeking of opposition to anything holy, pure and human. This album truly gets better with each listen, and is totally revolting. -Kelly Tee