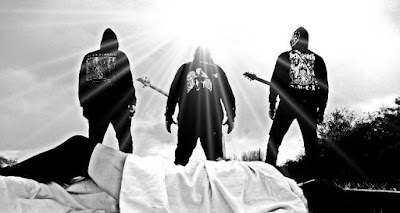 Interview with Arno of DAY OF THE BEAST

Kelly Tee: Day Of The Beast, a relatively new band to the black metal scene. How did it all start for you guys? How did Day Of The Beast spawn so to speak?
Hi Kelly, thanks for giving us an opportunity for an interview with you and Dave from Autoeroticasphyxium Zine.
The band was born in May 2017, Demoniac and Sheogorath were in a pub together and discussed a project to create an old school black metal and then Day of the Beast was created.
I joined them a few months later, in July 2017, as a guitarist.

Kelly Tee: Before Day Of The Beast, was it black metal for you musicians or did you guys dabble in other forms of heavy metal?
On my side, I was not used to listening to a lot of Black Metal, I knew the big names like Marduk, Immortal, Emperor. I was more involved in Thrash Metal and bands like Machine Head, Exodus… My two partners made me like this music and especially the old school wave which influences our writing / composing of our songs.
Demoniac listened to Black Metal for a long time but he also likes Thrash (he is a huge fan of Slayer), Heavy Metal, War Metal. He has this knowledge of underground music.
Sheogorath is probably the most eclectic of the band. He listens mostly black metal music but also listens to other kinds of music I mean other than Metal.
All of us are using all these different inspirations to compose our music and sometimes you can find a more thrashy or heavy riffs or drums section which is pretty cool and this allow us not to stay in one genre all the time and create some surprises when you listen to our songs.

Dave Wolff: In your interview for Occult Black Metal Zine you stated your lyrics are not meant to cast blame on Christianity but rather to express your views about it.
In our lyrics, we only expose our visions of Christianity BUT we would never tell anyone through our music that this religion is bad or good. We are not here to create any polemics: People have their own opinions and we fully respect it. We play music because this is our way to express feelings… we make it for people's pleasure and also our pleasure. We create music that we like.

Kelly Tee: Your 2018 EP release First Invocation was three tracks of rough, nasty black metal. How successful has this EP been for you guys?
For us, it is with great pleasure that we see that our first EP was so well welcomed everywhere. We got very nice reviews in France but also in foreign countries (Australia for example ).
Honestly speaking, we were not expecting such great feedback and selling so fast our EP and Merch.
This is so motivating for us to get all this support around the world. It pushes us to make a fucking good first full-length album 😊

Kelly Tee: What is First Invocation all about? What is the inspiration for the impure and evil content?
The inspirations are numerous: horror movies, books, old school atmosphere/vibes. Regarding Lyrics and Demoniac watches a lot of horror movies and reads lots of satanic books which helps us to create this atmosphere.

Kelly Tee: The content of First Invocation is deliciously satanic and dark, with tracks such as ‘Bastard Jesus Christ' and Descent Into Hell and of course Perversions De Sade. Is this type of content more than just art for the boys of Day Of The Beast or do you use the power of the anti-Christ themes to amplify your art?
We choose to put all the nasty/ugly sides of the black metal music and its topics like Satanism, occult, religion (anti-Christian). We want those people when they listen to us or read our titles to feel a little bit shocked but in the good sense if you get what I mean. We are not here to create polemics or anything like that we are here to play our music and that's it. As stated before, everybody has his/her beliefs and choices and we respect that.

Dave Wolff: What inspired you to write a song about the Marquis De Sade, and in what ways does it fit the band's concept? And how much research did you on De Sade before writing about him?
Demoniac read books from Marquis de Sade and took his inspiration with it to compose the song. This author was a perfect to fit for our music, and we wanted it to be "shocking". The universe from him corresponds 100% to what we would like to include in our music/lyrics. We also look at the internet information regarding the person, who he was. You need to understand something before writing or composing about it. It is crucial so that what you tell has a sense.

Kelly Tee: The European metal scene, particularly black metal is solid. Has France always been a country to embrace black metal? Or this a relatively new sub-genre to take off over there?
Of course, the European scene is great for Black Metal mainly Scandinavia or Eastern Europe but in France, this genre is not so well known. It was a challenge for us to create an old school black metal band from France as the scene hasn’t got a lot of representation here.
In France, there are some blackened death metal bands but True black metal or any other types of BM not so much. So creating old school black metal meant that we took a risk but we won is a good way of putting it.

Kelly Tee: How was Day Of The Beast been received by your home town Dunkirk? Have you had any opposition given the ungodly and possibly offensive (to some) nature of your music?
Dunkirk is not a big town for metal. We have a couple of friends that enjoy our music but if you want to get known you need to see venture outside of Dunkirk. For example, the main town in the North of France is LILLE where you get exposure for concerts, radios …
Regarding offensive or bad feedback we have yet to get any, but who knows what future could bring 😊.

Kelly Tee: Where would you say your largest fan base is and why?
As a French band, our main fan base is in France. But we are surprised that we sold EP and been listening to in Australia, Malaysia, Mexico, the USA, Italy, Germany, Belgium, Russia.
This is great to know that our music is being listened to around the world.
Kelly Tee: Day Of The Beast is currently working on new material. How will this compare to the sounds of First Invocation EP, what can we all expect?
We have a path with our first EP so the full-length album will follow this path. We have the sound that we want to keep. However, we will try to add more melodics, atmospheric passages and try to make songs that have a larger time duration. Expect even more violent, nastier, uglier, creepier, more everything! I have already said too much. I have to stop now ha ha ha 😊 surprise surprise.

Kelly Tee: When can Fans expect your next onslaught of blasphemy to hit Bandcamp & digital platforms?
We haven’t got a set date yet, however if you follow our Facebook page we will be keeping bands updates. It is not too far away.

Dave Wolff: How soon do you expect to start performing outside Europe, and where would you most like to make an appearance?
Of course, we would like to play outside France: Belgium, Holland, Germany, Australia (isn't it Kelly? 😉) We got people in the US asking us when we would come over but you know it is not easy for a band to plan such a long trip. First, we will work on the album and then we will see how we could arrange to play outside of France.

Kelly Tee: You guys have been busy doing some cool gigs around France and Europe. For those of us who might have to wait to see you play, what can one expect from a Day Of The Beast live show?
Our live performances are based on an atmosphere of which we want to be the darkest possible. We wear some kind of Priests' suits and thanks to this our faces are hidden. We want to leave a certain mystery around the band. We also have lots of accessories which point to occult and dark atmosphere but the best way to see this is to come to our future gigs! 😉
Kelly & Dave: Thanks for your time Arno, is there anything else you would like say? You have the floor.
Thanks for your time and for the great support you have offered us since the beginning. Thanks to all the people around the world who support us and spread the Beast's speech. Without your support, Day of the Beast would not exist so huge thanks to all of you!
DAY OF THE BEAST on Facebook
DAY OF THE BEAST on Bandcamp
-Kelly Tee and Dave Wolff
Posted by Dave Wolff at 7:48 PM