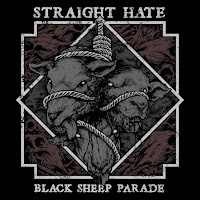 Band: STRAIGHT HATE
Location: Chelm/Lublin, Lubelskie
Country: Poland
Genre: Grindcore, death metal
Full Length: Black Sheep Parade
Label: Deformeathing Production
Format: CD, streaming
Release date: September 21st, 2019
I've heard Straight Hate before and even reviewed one of their releases once. They set a rather high standard for their last release and now the time has come to review their next album. I have to say, it's really cool to see a band like this that I really liked last time come back with another really strong release. In fact so strong, I think I like it even better than their last release. For those that don't know Straight Hate combines a rather addictive mixture of hardcore and grindcore, and maaaannnnn it feels good to see a band do this stuff so well!
For those that don't know the lads hail from Poland, and fuck me, these dudes are angry. With the benefit of the modern age Straight Hate has managed to combine the riffage and pummeling drum sound of early Napalm Death (first few albums) with hardcore sensibilities, simple riffage, and some great breakdowns and made it sound really good. The crystal clear production means you can hear the riffage and the drumming perfectly and this allows the listener to fully appreciate it.
The songs themselves are no bullshit grind attacks. Most songs fall into the 1:30-2:30 minute range so there's no time for wanky crap.... just straight down to business. Delicious riffage with flawless execution is the order of the day. In my humble opinion, there is absolutely nothing bad that can be said about this band. The vocalist reminds me of the original vocalist from Terrorizer. This is addictive stuff, and I have to say I got drawn right into it from the start of this release. I know it sounds like I'm blowing smoke up these dudes’ asses, but this release really is that good. I would even say it goes beyond being good for the genre; it’s a great metal release full stop. Whether you like grind or not you won't be able to deny how good these guys actually are.
All I can do is implore you to look these guys up and see for yourself!!!! -Reggae