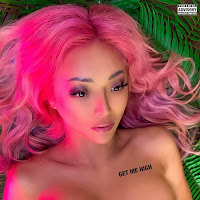 Vocalist: AYUMI ANIME
Location: Los Angeles, California
Country: USA
Genre: Urban pop, R&B
Single: Get Me High
Label: Bong Mines Entertainment
Format: Digital
Release date: November 1, 2019
Ayumi Anime's smoking debut single “Get Me High” is sure to put you in the zone. Co-written by Alexander Frazier and Olena Kim (Anime's real name), the song is pinch of urban pop, a bowl of contemporary R&B, and totally chill. Director Togeze inspires some mad love for Anime in the accompanying “Get Me High” music video. "Let's fall for each other, in deep conversation," Anime sings in "Let's Get High." Autoeroticasphyxium zine had a light chat with the singer-songwriter after the song dropped a few days ago, and we fell into deep trance.
Ayumi says she "didn't want any heavy lyrics in 'Get Me High.' This song aims to let people chill, relax and stay positive, because this is so important nowadays." She told us she was inspired to write about "getting high in L.A." when she "first got the joint just to get rid of the stress and got flown into the universe."
The mesmerizing musician found a muse in marijuana, but not pure nirvana. "I think the only mystical property that it can have is relaxing your mind," she told us. "So when you're totally relaxed, you forget about all your problems and just focus on yourself or the things you really love and that make you happy."
Keeping us very happy, Ayumi also discussed her next moves. She revealed exclusively to us the she will release her second single, "Everything I Need," in mid-January.
Anime is probably best known as Penthouse magazine's Pet of the Month for October, 2017. Captivating as she is, the performer, who was born and raised in Kheron, Ukraine, is no mere eye candy. She says songwriting was always her "ultimate and planned goal."
Ayumi was 15 when she when got hit one too many times by the sounds of Britney Spears. When she was 20 she moved to Russia, but don't worry, she's not a sleeper agent. Her only K.G.B. connection is Killer Green Bud. According to what you can find online, Ayumi speaks our language, and many others. She graduated from Shevchenko Media Television High School in Kiev as a TV reporter with a degree in Philology.
The charismatic Korean who has appeared in shoots Nike, Armani, and Chanel, "strives to empower women and the Asian community to break the glass ceiling, become leaders and overcome any obstacles they may face."
And what better way to relax while pursuing lofty ambitions? Musicians have been separating stems from seeds since the Ink Spots' "That Cat Is High" came out in 1938. Even Woody Guthrie, the guy who wrote This Land is Your Land" invited the world to “Take a Whiff on Me.” So hotbox the room and play some music. Roll it up, burn it up, smoke it up. All night.
"Get me high" is available on Spotify and Apple music. -Tony Sokol