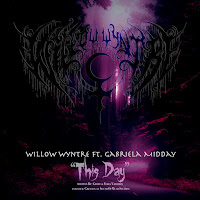 Singer: WILLOW WYNTRE
Location: Richmond, Virginia
Country: USA
Genre: Eclectic Vampire Metal
Single: This Day
Label: Independent
Format: Digital
Mixed by: Greyson "Queen Gene" Goodenow, Sound Of Music studios
Mastered by: William Bruce Smith, Sound Of Music studios
Release date: October 31, 2019
If you reside in New York City or Los Angeles and think your hometown has a monopoly on eclectic music, there is a solo artist from Richmond, Virginia who will explode and fragment your perceptions. I’ve read a little about this city and the local entertainment mostly ranges from rap to country to DJs. There’s also an underground scene giving more opportunities for DIY artists (rap and punk bands) to be heard. There are bound to be musicians in cities like this whose mode of thought and expression is far removed from everyone’s, and Willow Wyntre who breaks every mold imaginable is among them.
Having worked with the experimental project Nekrotrampz with Paul Munster, Wyntre (aka Danielle D. Everett) recently went solo and released a number of singles and covers streaming on Soundcloud (including She Wants Revenge’s “Tear You Apart” and Soft Cell’s “Tainted Love”). She has been promoting her new single “This Day” just about everywhere online since it came out in October 2019, just in time for Halloween. Given what compels her songwriting, it’s anyone’s guess what incorporeal nocturnal beings would be summoned if you listened late at night… but I can imagine.
How to describe this and Wynter’s music in general? If you have an equal appreciation for musical theater, spirituality, vampire legends, occultism, horror literature, goth, hip hop, symphonic metal, synthpop and classical with touches of opera and commerciality, Wynter is worth noticing. On Facebook, she defines her music as “eclectic vampire metal”. This description may sum it up on a basic level but for a full understanding of what she means you have to immerse yourself in it.
“This Day” opens with a glacial mood, with keyboards, haunting background vocals, and a piano-driven gothic feel. A beat is suddenly added to generate an effect best described as trippy. It’s likened to hip hop, but not your usual hip hop. It’s slightly distorted with more percussive notes and additional effects. I consider it safe to say it goes far beyond anything Linkin Park has done crossing metal and rap over. I think both “camps” are going to be confounded hearing it for the first time. And this just the first thirty seconds or so.
Wynter’s vocals are ethereal and seductive as she alternates between rap flow, a melodic style likened to Tarja Turunen and Cristina Scabbia and agonized near-screeching. This is a riveting vehicle to describe a troubled childhood in which existence is the result of a drug-addled “momentary lapse of reason.” From there she describes being the odd girl out in school with angst that would have made Kurt Cobain swell with pride. Her intonation suggests the brutal honesty of daily existence.
As the song continues its gothic premise with its myriad of instruments from her backup band (including emotional violin passages) Wyntre relates how her salvation was found in occultism and dark magic. She does so in a way that makes her journey into darkness sound convincing and beautiful until she finally finds her heaven in the darkest afterlife. She now fears no evil as she passes into the realms of shadow and death. She has already experienced the hell of human existence, and has made peace with her demons within and without. She is now a succubus of medieval legend, reappearing on earth to inspire others on society’s outer fringes.
“This Day” is an exquisitely crafted tale in which alienation is a badge of courage and every night creature is welcomed as a personal friend. There’s no need to sell one’s soul since it has already found its home… in the shade of twilight. -Dave Wolff