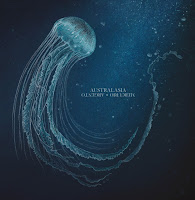 Project: AUSTRALASIA
Country: Italy
Genre: Blackened post rock/electronica
Single: Mercurio • Argento
Label: Independent
Format: Vinyl, digital
Release date: November 5, 2019
Since 2012 Australasia has existed on the outer fringes of black metal, post-rock and synth/electronica, shaping them into something exclusively its own, adding piano, strings, female vocals and other sounds. When Frank Garcia reviewed Australasia’s 2013 full length “Vertebra” (released on Immortal Frost Productions), he commented on its striking balance between clear instrumentation and clear production. I’ve been listening to each of Australasia’s releases to get a broader picture of this project, and found their albums to be theatrical (“Sin4tr4”), futuristic and atmospheric (“Vertebra”), and mournfully contemplative (“Notturno”). Australasia’s latest single from last November, “Mercurio • Argento” is a departure of sorts from those albums. While the sounds still vary greatly, they’re mostly based on keyboards and synthesizers. There are guitar and drum sounds added, but their function is to complement the keys and synths when keys and synths usually complement the guitars. There are also no strings or vocals of any kind. This approach turns Australasia’s electronic themes to a multi-faceted soundscape you can’t tell is the ethereal plane or virtual reality. It allows you to decide for yourself where you are, how long you want to remain there and how far you want to travel. The music is smooth, distorted, stark, cold and dark without lacking vibrancy. The greys, maroons and dark blues you experience here are neither depressive or overly abstract but rather profound and dramatic. I see a lot of artistic devotion without the snobbery. I thought I may have been reading too much into this; but after reading fan feedback on Australasia’s Bandcamp profile I realized other listeners reached similar conclusions. While listening to this single I was reminded of the writings of Sylvia Plath, and the paintings of Giger and Goya. Whatever you perceive of this single, you’ll be exercising your imagination to its limits. -Dave Wolff