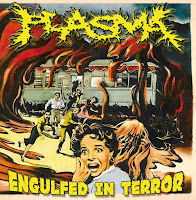 Band: Plasma
Location: Frankfurt
Country: Germany
Genre: Goregrind
Full Length: Engulfed in Terror
Format: Compact disc, digital album
Label: Rotten Roll Rex (Germany)
Release date: November 6, 2020
Just as I thought my playlist couldn't get any better, I was led to “Engulfed in Terror” by the legendary German goregrinders Plasma! When it comes to the recent history of Plasma, in 2019 they offered us “Ethical Waste,” which has proven itself to be a delightful gory extravaganza. And once again, Plasma has hit the nail on the head it seems. “Engulfed in Terror” in my opinion is even better than Ethical Waste... so it seems as if Plasma just improves as time goes on!
Heavy on the gargles and the gurgles, “Engulfed in Terror” has gone back in time a bit vocally. When I sent my review of “Ethical Waste” to Plasma I was told that there was some negative criticism when it came to that album (I don't understand why). Personally, I thought it was pretty great... but hey, everyone is a critic. I can only assume that this is why the vocals are pitch shifter heavy. But honestly Plasma is excellent no matter which way they present themselves.
The best way I can explain this album is a cross between the vibes of Creeping! Crushing! Crawling! and the production quality of “Ethical Waste”. Old-school vocals and new-school tightness makes for a delectable array of audio carnage... and to be quite honest I don't have a negative thing to say. (I rarely do when it comes to Plasma).
Plasma hails from Frankfurt, Germany since 1998 and this is their fifth full-length album! So unearth this cavernous sickness, dust off the worms and the maggots, and dig in for a splendorous catastrophe. When it comes to gore... could you ask for more? –Devin Joseph Meaney
Lineup:
Ulfinator: Bass, vocals
Smoke: Vocals, guitars
Schnaps: Drums
Track list:
1. Blotching Protoplasma
2. Raid of the Undead
3. Human Extermination
4. Martian Massinvasion
5. Crawling Giant
6. Unearthly Warfare
7. The Horrifying Horde
8. Eight legged Terror
9. Rampaging Master-Beast
10. Afflicted Zombification
11. Primordial Fury
12. Shattering Swarm
13. Test Tube Terror
14. Deadly Menace
15. Thundering Sea Giant
16. Atoms Gone Wild
17. Tremendous Terror-Beast
18. Hungering for Human Pray
19. Prehistoric Abomination
20. From Laboratory Into War
Posted by Dave Wolff at 10:24 PM