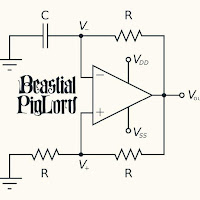 Band: Beastial Piglord
Location: Kinston, North Carolina
Country: USA
Genre: Extreme metal
Full Length: Visitation Hour
Label: Slorebs Castle Records
Format: Digital album
Release date: January 4, 2021
It’s the beginning of 2021 and Hudson Conner is at it again, finding new molds to break with his project Beastial Piglord, finding new methods to confound and entrance. I’ve discussed BP at length in the past year and a half, so there’s no need to elaborate on the exclusive fantasy worlds Conner creates. For more about this you can refer to older BP reviews at the bottom of this page. Each of his albums travels farther into the ether, and “Visitation Hour” starts like typical electronic metal only to grow progressively stranger. This album is a cybernetic nightmare fueled by sleep deprivation, set somewhere like a mental asylum a thousand years in the future. Set in a time where technology has literally taken over the population’s minds, computer chips and all, and those whose minds respond adversely are confined, locked away and forgotten. In contrast to the immaculate future envisioned so often in science fiction literature, the asylum (most likely a basement) is dark, dank and resounds with the screams of the insane. Think of a high tech mental asylum like the one in “In the Mouth of Madness”, only twice as dismal. I watched an online review of that movie and thought if people were driven insane on a mass scale by nameless horrors invoked by music instead of horror literature, “Visitation Hour” would likely be directly responsible. For all this, it’s obvious from listening to the songwriting and arrangements that Conner doesn’t resort to following formulaic guidelines when experimenting with musical genres to learn and grow as a musician. Taking thrash, death metal, ambient, cyber, horror soundtracks, electronica, funk, grind, jazz and blues, prog rock, psychedelia, and hip hop and adding menacing robotic voices and voices you would vaguely remember from disturbing dreams, Beastial Piglord is a project that is versatile in that nothing is planned and there are no limitations to what you can do when composing a song. Since releasing “Visitation Hour” Conner released another full length for BP entitled “OddBall.” –Dave Wolff
Lineup:
Hudson Conner: All vocals and instruments
Track list:
1. Plot
2. Dither
3. Modulating Humans
4. Answer/Solution
5. Brain Acupuncture
6. Depersonalization
7. Blending in with the Air
8. Huh?
9. Life Simulator
10. Death Simulator