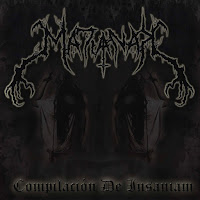 Band: Matianak
Location: Chicago, Illinois
Country; USA
Genre: Black metal
Full Length: Compilación De Insaniam
Format: Digital album
Label: Independent
Release date: November 27, 2020
Matianak hail from Chicago, Illinois. They have a sound that basically reminds me of an early to middle period Mayhem, mixed with some stuff like Dark Funeral etc. Matianak aren't really doing anything particularly original but they are filling a void left by many of the brutal black metal bands either not putting out records or leaving their original sound behind.
A few songs in it becomes clear that Matianak are very good at what they do. The guitars have the usual droning brutal sound the above mentioned bands have but they do cut in with some great melodies and the song writing is actually quite top notch. There are some quite inspired moments that tend to remind me of Dissection a little bit as well. The drumming has a great groove and while not as intense or relentless as some bands like Marduk or Mayhem this guy plays well, and it doesn't smother the songs which is good. The vocals also sit within fairly Norwegian black metal territory. One thing the band have managed to do is sound fairly old school but still clear and easy to listen to as well. After a quick stalk of their Facebook, it would appear these guys are known for putting on some wild black metal shows! It's got me curious I have to say, I’d love to see how these people evolve and follow their journey!
Overall I have to say I quite enjoyed this. It took me back to 90's when this stuff was first coming out of Europe. Very much a solid and worthy effort. Sometimes it’s just great to kick back with a beer and kick it old school and these guys deliver the goods for those underground black metal creatures out there!
Be sure to chuck the guys a like on https://www.facebook.com/MatianakOfficial -Reggae
Lineup:
Arelys Jimenez: Vocals, lyrics
Taylor Cook: Guitars, songwriting
Joel Miller: Bass
Rick Hernandez: Drums, guitar solos, samples, songwriting of “Voodoo Possession”
Track list:
1. Awaiting Doom.
2. Tumba Noxus
3. Psychedelic Insanity
4. A Haunting Testimony
5. Black River Falls
6. Delusional Obsession
7. Homicidal Offering
8. Ceremonial Blood Ritual
9. Voodoo Possession
Read Dave Wolff's interview with Arelys Jimenez of Matianak here.
Posted by Dave Wolff at 10:05 PM