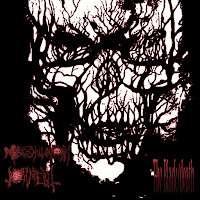 Band: Misanthropik Torment
Location: Lexington, Kentucky
Country: USA
Genre: Blackened death metal
Full Length: The Black Death
Format: Digital album
Label: Misanthropik Records
Release date: December 25, 2019
I want you all to imagine the absolute worst case scenario you can think of, I mean really dive in deep.
I’m sure amongst the 496 followers I have right now I’d get 496 different answers.
For me it would be 3 main things.
1. Losing my Family/Future Wife/The Death of Zeus
2. Drowning in the Ocean
3. Spiders
But as much as my top 3 worst-case scenarios would be horrific for me, how much worst could you go from
-The Black Death.
So, today I’ll be reviewing an older record by the band Misanthropik Torment and what’s special about this album is that it features a staggering 22 tracks!! You know when you add that many songs onto your album that you’re going to be making a big statement and let lightning strike me down as I speak if they don’t make that statement bold and clear!
When I was listening to this album so many things were going through my mind.
-How would this album unfold?
-What sort of direction do Erik and the band want to take this record?
-Amongst the 22 tracks, how will they all come together?
And the answer to these questions is that this album comes together in the same way chaotic neutral comes together because although this is a very long and daring journey to take it’s also one of the most out-there, batshit and all-around maniac experiences I’ve ever had (sonically speaking)
Just the first track ‘Fornication In The Convent’ is a good sign of what to expect, it starts off with an 11-minute track! The first 3-4 minutes are these harrowing horror-inspired sounds and instrumentals which is something I never heard from the band’s latest release which is a sign of creative adventuring from the band in trying to find the styles and sounds that suit them best and this is just one of MANY examples here of that happening.
The production here is more raw and more unsatisfactory than I’ve ever heard them recently. I’m not sure what the mindset was of the band in making the records so rugged and dare I say ‘primal’ in execution but when you look at the pioneer bands of the ‘Black Metal’ sub-genre it’s clear that the more anti mastered the record is the more metal credibility if that’s the right way to phrase it the record attracts.
Especially talking about underground records, most bands will always try and outdo one another with how ‘brutal’ they can sound and how much more ‘edgy’ they can sound and I feel this would be the case here.
Stylistically there so many diverse elements in play here with many songs incorporating new and strange sound choices which again proves just how focused the band was at the time to mix the bag and play around with anything and everything to see what would best suit them in the long run, I know now they have found their ‘prime groove’ but it can be hard in the early going’s to know exactly what you're meant to do and how and so I see this record as a glorious example of a sonic paint palette, you’ve got so many colours to choose from why not try them all?
Finally, Erik. Man he’s never sounded wilder on the vocals, he’s really pushing himself I feel on this album than any other I’ve heard in the past, he’s trying everything from
-Singing
-Screaming
-Growling
-Low/High Pitch
-Harmonization
He really is pulling all the stops on his quest to find the right sound and coupled with the 22 track set list he really has in many ways created his experimental ‘magnum opus’ with this album and although he’s calmed (kind of) a bit now on his latest records all this does is clarify what I already knew from the start and that is Erik and the rest of the amazing band lead the charge when it comes to passion, heart, determination and relentless attitude!
Don’t let the track list scare you away, because this album will do that for you. The sounds and production are scary to say the least and the journey you will partake in if you so choose will be one insanity and fear and as I said above, what’s worse than
-The Black Death? –Corban Skipwith
Track list:
1. Fornication in the Convent
2. Victims Arn't We All
3. I Choose to Be
4. Extreme Hatred
5. S.S.B.S.S.R.
6. Choose Your Disease
7. Eviserated Soul
8. Monsters Are Real
9. Necromantik (Pt1)
10. Duct Tape Fantasies
11. Rambelings of a Mad Man
12. Plagues of Mankind
13. The Godless Man Lies
14. Happy Robots
15. For Honor
16. Cleansed (Necromantik Pt. 2)
17. Savage Nightmare
18. Indidiously Murder (Demo)
19. Putrid Sin
20. Mass Concumption
This review can also be read at Corban Skipwith's Facebook group Relentless Reviews with Corbz. -DW
Posted by Dave Wolff at 6:18 PM