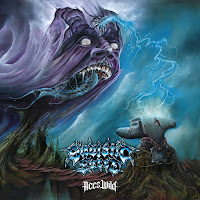 Band: Sadistic Force
Location: Austin, Texas
Country: USA
Genre: Black thrash metal
Full Length: Aces Wild
Format: CD, cassette, digital album
Label: Independent
Release date: October 1, 2021
So, this is the Debut album by band Sadistic Force yet another great discovery off of Bandcamp and coming loaded with 8 new tracks ready to fill up your metal dose on!
You know, after listening to this album I found a lot of interesting things about it. For one the amount of variety and interesting stylistic fusions was something I wasn’t expecting!
At first glance this album could be mistaken for a Thrash album but then as you get deeper and deeper into the record you start to hear some songs resembling elements of ‘Black Metal’ then in other songs you find rare traces of ‘Progressive Metal’ in the way those melodic guitar strings and patterns work!
Some songs even have elements of ‘Death Metal’ with the pure aggression and force behind the drums, heavy handed guitar and vocals.
This album really is a mixed bag of treats! I wouldn’t say it’s ‘too’ messy with most songs utilising the various elements in reasonable doses not to overlap the already existing foundations set song for song but again it’s interesting how each song and style fuse together to create a ‘show and tell’ of sorts for the album.
I really appreciate the effort to ‘diversify’ the record and have it stand out from the rest, honestly when I saw the album cover I was assuming it would sound like some badass ‘Viking Metal’ or something similar to a band like ‘Amon Amarth’ that’s not to say I’m disappointed that it didn’t it’s just that’s the direction my mind was going with the art work.
None the less, this is at best a great creative sonic experience that enables all areas of Metal to unleash this passionate pallet of music and specifically metal to the audience. Some may not like all the different styles and prefer a more ‘traditional’ approach but to these like minded people I say ‘Give it a chance, and I promise it will grow on you’.
Go support the band and the social media and of course the golden rule: SHARE.SHARE.SHARE. -Corban Skipwith
Lineup:
James Oliver: Guitar, vocals
Blaine Dismukes: Bass, additional vocals
Jose Alcaraz: Drums, additional vocals
Track list:
1. 2,000 Volts
2. Cavern of the Wraith
3. Aces Wild
4. Murder at Boggy Creek
5. Strike of the Iron
6. The Blade Itself
7. The Living Grave
8. Snowblind in Texas
This review can also be read at Corban Skipwith's Facebook group Relentless Reviews with Corbz. -DW
Posted by Dave Wolff at 6:11 PM