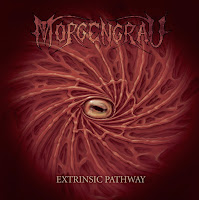 MORGENGRAU
Extrinsic Pathway
Blind God Records
If you by any chance have heard the band AUTUMN TEARS, you wouldn't believe that the same vocalist from that band is the same vocalist and frontwoman of MORGENGRAU. She also worked for the record label Dark Symphonies, was briefly with the Texan band HOD, and did vocals in two albums for IGNITOR. In a recent interview, Erika Swinnich stated that she wanted to go back to her Death Metal roots and play heavier, darker and more aggressive music; she was not completely satisfied playing with her previous bands.
In reality, when you hear a name like MONGENGRAU, you really don't expect nothing but an average band, some people probably wouldn't even give it a chance, but when you actually listen to this album, it will make your jaw hit the floor, no doubt about it! MORGENGRAU managed to create an album full of memorable Death Metal tunes (in the old fashioned way, of course) in the vein of bands like MORBID ANGEL, DEICIDE, IMMOLATION, SEPULTURA, ASPHYX, etc; the vocals are harsh-dry-aggressive, they remind me of a less chaotic version of Lori Bravo of NUCLEAR DEATH, but more straightforward Death Metal oriented as well.
The chemistry between the band members is impressive; the album is full of good quality riffs, nicely supported by a powerful wall of bass lines, demolishing drumming and spine chilling vocals.
There’s a cover of SEPULTURA’s “Inner Self”, but this is not a carbon copy of the same track, they play it on the own style, and it sounds heavier and rawer than the original.
As far as favorite tracks, it’s hard to choose, but I will go with “Antihetical”, “The White Death”, “Choking Grove” and “Polymorphic Communion.”
There are definitely no weak tracks in this album, every single one of them will hit you like a ton of bricks and pulverize your miserable souls. If you love Death Metal, especially the old fashioned way, then this could be the perfect ear-slaughter! -Tony "Reborn" Juarez