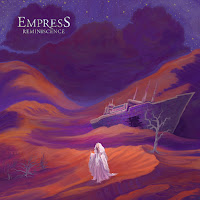 EMPRESS
Reminiscence
Independent
Release Date: February 12, 2018
Country of origin: Canada
Genre: Stoner/sludge rock
Today I was sent ''Reminiscence,'' a new release from Vancouver, Canada’s EMPRESS. They are a recently formed stoner/sludge trio who are getting ready to release this officially on February 12th. I was expecting this to be your stereotypical stoner/doom kind of stuff, but really it is quite unique. One thing that I noticed at first that stayed strong throughout the entire release was the vocals. They are not your standard doom vocals and there is clearly a lot of emotion behind them. The guitars and bass are fuzzy, still packing a punch, sending a whack of heaviness to the side of the noggin. The drums are tight, this whole release coming together quite well. Another thing I will note is the atmosphere. During different parts of this release, there is extreme heaviness, riffs dark and forlorn permeating the tracks. Soon after, the atmosphere changes, and although it is depressive at times, it is also peaceful. To use a poor analogy, I could say that with this release you start off at the entrance of a very dark tunnel. The tunnel gets darker the deeper you go, but eventually there are cracks in the walls and light seeps through, a full blown sunrise at the end of the disc. This is probably narrowed down to personal taste and interpretation, but this is how I felt about all this. A really well done EP from my point of view, I think this deserves to be played by many people. Also, if you are not painfully broke, send the band a few dollars and cop this piece yourself. Production is expensive, you know. -Devin Joseph Meaney