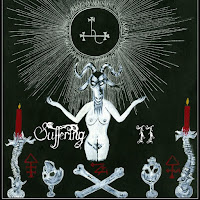 SUFFERING
11
Independent
Country of origin: UK
Genre: Black/doom metal
Suffering’s interview has been available for reading here since January. As I sought information about their debut album, Sturmgeist Forniator Insultus mostly preferred it to be a mystery until its official release. The date is still unannounced but I was sent an advance stream with a complete track list and cover art (designed by Enchanted Woodland). One thing Insultus did reveal about 11 is, it was produced, mixed and mastered by contacts from other bands (Luke Bowers of Opium Lord and Greg Chandler of Esoteric). As such it comes across as a truly independent by-musicians-for-fans effort listeners should be able to relate to. The production is simultaneously raw and clean, balancing chaos with order, old school with new school. It’s not so raw that everything sounds like a blur, and the musicianship is easy to assimilate. Regarding the band’s doom metal elements, the dirges written into the material have a grandiose quality, reminding me of old Hellhammer and Celtic Frost. I heard hints of Slayer and Dark Angel with 90s black metal in several other songs. Listening overall is like experiencing a forbidden ritual devised and filmed for a horror film of the Hammer variety for the sudden mood changes between tracks. A more apt comparison may be John Carpenter’s In The Mouth Of Madness which I watched for recreation recently. That movie didn’t do well financially, but it did present ideas about Lovecraftian fantasy merging with the real world in a modern context. In some ways I received the same impression from 11 and the manner in which it was presented. Only while the movie beclouded the lines between fiction and reality, Suffering create their own reality and make the line clear. The element of fantasy here is apparent from the beginning. The first track Shanshu is preceded by an introduction like a Laveyan satanic ritual, building tension and leading you to anticipate the moment when it finally kicks in. Upon doing so it reveals scalding, mind-shredding blackness with a few well-placed dissonant chords and percussion that is extremely primal. The turn it takes from that track to Diary Of A Street Walker has a profound effect, going from searing rage to the deepest despondency. You get more variance in moods with The Eternal Dance, Deviant Women Of The Barren Plains, and especially the epic Rebirth Through Cursed Dirt. 11 is theatrical and ceremonious without laying it on too thick; Suffering make use of their resources and experience as musicians to spawn something with familiar influences and enough innovation to be recognizable on its own. -Dave Wolff

Track list:
1. Shanshu
2. Releasing The Eleven
3. Diary Of A Street Walker
4. The Eternal Dance
5. Conjuration Through Black Horns
6. Deviant Women Of The Barren Plains
7. The Cult Of Lilim
8. Rebirth Through Cursed Dirt
Posted by Dave Wolff at 1:45 PM