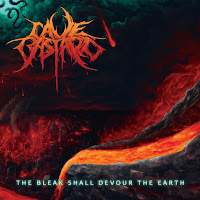 CAVE BASTARD
The Bleak Shall Devour The Earth
Accident Prone
Country of origin: USA
Genre: Apocalyptic death metal
Release date: Friday, March 23rd 2018
The official report is The Bleak Shall Devour The Earth has been in development for three and a half years. If you waited that long for a band’s debut release you’re likely hoping you’re not disappointed. Until it comes out you can hear a demo and a split with BLKOPS at Cave Bastard’s Bandcamp profile. Cave Bastard is comprised of current and former members of other underground bands; as such it’s a given that experience is on their side. Cattle Decapitation is the only band I’m familiar with whose members are involved in Cave Bastard; other bands mentioned include Ritual Torture, Bridge Jumper and Temblad. Since Cattle Decapitation delivers in the brutality department I decided to give The Bleak Shall Devour The Earth a chance. My first impression is the album is not bad if you don’t mind early death metal, occasionally dissonant with gritty production, suffused with Carnivore, Sepultura and Amebix. My second impression is a conceptual theme was masterminded to give The Bleak Shall Devour The Earth a narrative feel. The advance promo from Earsplit doesn’t include the lyrics so I can’t describe the images the music is set to. All I can reveal is there are pictures of corruption, atrocity and inhumanity and the narrative is to continue on future releases. Going by the presence and demeanor of the songs I can conceive a series of global catastrophes that transpired over many years, and a new governmental force installed to keep order, only to make matters worse somewhere down the road. Perhaps scientific experiments of some kind are part of this narrative, or the aftereffects of experiments that took place in the past, I’m just speculating, but the songs resonate of a bleak and desolated future and I’m eager to see what the band had in mind when writing the lyrics. I get this most strongly from Throes Of The Devourer, Neo - Genesis, Methane Epistaxis, Massacre Reaction, Trapped In A World Of Formlessness and Purity Through Oblivion. The Bleak Shall Devour The Earth was recorded last October at Audio Design Studios in San Diego, California. Billy Anderson recorded and mixed the material, drawing on his experience with Neurosis, Brutal Truth and Cattle Decapitation. The front cover art was designed by Varises Otak. -Dave Wolff