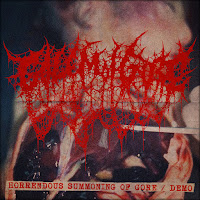 GOLEM OF GORE
Horrendous Summoning Of Gore
Independent
Place of origin: Italy
Genre: Goregrind
Release date: April 13, 2018
For the past while I did not get the chance to do any writing. Work responsibilities along with ''chill time'' took up the majority of my days. I did not get a chance to listen to much music, either. Now that I have more time on my hands, I have managed to listen to some supremely rabid tunes and do some writing. This means that I am back at reviewing... at least for now. A few days ago I came upon the demo ''Horrendous Summoning Of Gore'' by Golem Of Gore. I threw on my headphones and what I now know to be putridly amazing goregrind assaulted my eardrums with a pinging splattery vengeance. The first thing that I will note is that these guys sound a lot like Last Days Of Humanity. I mean, like... a lot. Right down to the gurgling gutturals and that ever so lovely ping snare. The music is tuned so low that to decipher it properly you might need to be standing in the bowels of hell itself. The tracks are short in classic L.D.O.H fashion. Again, just like L.D.O.H, The track titles are offensive and disgusting in nature. This is goregrind, so personally I would have it no other way. Clocking in at under eight minutes long, this demo still proves to be a sexy little burst of gory, noisy fun. The production quality is very high end for goregrind, and by that I mean it does not sound like it was recorded on a tape deck in 1991. Who am I kidding? I would still like it even if it did! Self-released in April 2018, I highly suggest checking out this gem from Italy. Fans of L.D.O.H and goregrind in general are sure to revel in this gore laden blast of purulent discharge. Just check it the fuck out, homie! -Devin Joseph Meaney