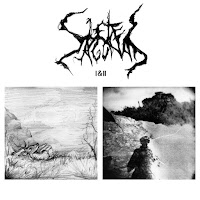 Band: SIETE LAGUNAS
Place of origin: Bogotá D.C., Cundinamarca, Colombia
Genre: Raw/experimental black metal
Album: I & II
Label: La Caverna Records
Release date: July 11, 2018
Siete Lagunas’ La Caverna Records debut compiles their 2017 and 2018 demos, presenting them as originally recorded without any remixing or remastering. Sticking to their guns and keeping the integrity of the original recordings places them in a category with Vlad Tepes (France), Burzum (Norway), Belketre (France) and Darkness Enshroud (USA). The raw guitars carry images of decay, atrophy, deterioration, crumbling burial chambers and heathlands strangled with insensate grass and moldering trees. The ten tracks from both demos are deliberately spontaneous and condensed, supplemented by abundant guitar feedback, ambience and experimental noise. Although they tend to fluctuate in mood, they’re dramatized with a well-founded and compelling amount of sincerity and devotion. The lead vocals are particularly expressive, channeling the decomposition of nature and regression of time with a chilling presence. Sound wise I generally prefer the tracks from the first demo, as they’re more encompassing and include acoustic guitar sections. The second demo have a recorded live quality but focus more on their experimentation with pure discordant clangor. However the last track taken from demo #2 is a hypnotic instrumental piece that drew me in as much as demo #1. Siete Lagunas has an engrossing lyrical concept, conceived to recapture the spirits of the Chibcha Indians of Colombia (also known as the Muisca Indians). The Chibcha Indians were a thriving society in South America (along with the Antillean Arawak, Jirajara, Páez, Chaké, Mape and Timote Indians) until the 16th century when the Spanish conquistadors invaded and assimilated them into modern society by the 18th century. This ancient tribe is remembered in the black metal tradition of remembering one’s distant ancestors, perhaps to remind the listener that human beings have not changed that much with all of humanity’s advancements in technology and modern religious beliefs. -Dave Wolff