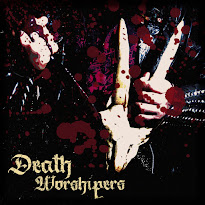 Band: Maze Of Terror
Location: Lima
Country: Peru
Genre: Thrash metal
Demo: Death Worshipers
Format: Digital, streaming
Label: Empire Records
Release date: September 13, 2019
Since 2012 Maze Of Terror has released a series of EPs and splits, plus a full length “Ready to Kill” which was released by Empire Records in 2016. I imagine the reason they decided to release “Death Worshipers” as a demo was to seek interest from independent labels. This should impress their production abilities as well as songwriting abilities upon labels. There’s quality sound for a demo and every instrument can be distinctly heard, especially bass tracks mixed and mastered just enough to accentuate the guitar tracks. Both of those instruments are well represented with sufficient depth to immerse the listener, and the vocals are mixed with some atmosphere to sharpen and give the material more bottom. The drum tracks could have been given similar treatment and could have been turned down in the final mix, but this doesn’t distract from the songs too much. I listened to some of the band’s back catalog on Bandcamp (2018’s “Evoked Black Souls”, 2017’s “Death for Our Rivals”, 2016’s “Ready to Kill” and 2012’s “Skullcrusher”) and their sound quality is something they don’t take lightly. Guitarists Razor and Criminal Mind are given unfettered room to advertise the resourceful license they take while composing riffs, as much as Leviathan and Hammer have to display their secure tightness as a rhythm section. Their music can be considered a contemporary interpretation of old school thrash and early death metal, something like Slayer and Deicide with a pure thrash attitude, the energy of early Sodom and Kreator and enough of an inclination toward South American death metal. Musicians who know what they’re doing can make all this a lethal combination. I can’t say if they had Slayer and Deicide in mind when writing and recording “Death Worshipers”, but it’s clear Maze Of Terror have a high regard for accumulating and marshaling the sheer frenzy those bands channeled into their songs. It can’t be denied that they express the same passion in spades. –Dave Wolff
Lineup:
Leviathan: Bass, vocals
Criminal Mind: Guitars
Razor: Guitars
Hammer: Drums