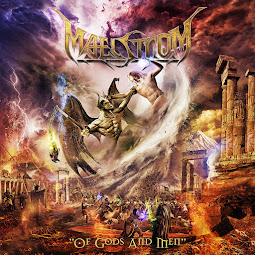 Band: Maelstrom
Location: Long Island, New York
Country: USA
Genre: Cinematic metal
Full Length: Of Gods and Men
Format: Digital album
Label: Predestined Music
Release date: May 22, 2020
Long Island, New York’s Maelstrom are survivors as its founding members Gary Vosganian (lead vocals) and Joe Lodes (guitars, bass, keyboards) have resiliently maintained their ambitious writing since 1988. Their vision was a blend of American speed metal, German thrash and epic fantasy far beyond most LI bands. Their concept of a conquering hero born to defeat a great evil stemmed from sword and sorcery power metal themes, spawning two demos in 1989 and 1991 (“Arise” and “This Battle to Make History, Yet History Never Comes”). Perhaps this was a case of “right formula, wrong time”.
While attending Maelstrom’s shows in the late 80s I saw their potential to transcend the Slayer and Metallica clones apparently being signed in droves to capitalize on thrash’s increasing popularity. All guitarists had to do was play like James Hetfield or Kerry King to be noticed. Bands who strove for more originality were either pushed aside or became more melodic. It seemed Maelstrom were held back because of this and as the thrash era ended their opportunity to continue was sadly lost.
“That which followed” remained a mystery until they returned in 2008 with their EP “It Was Predestined,” which included three re-recorded demo tracks. Longtime fans were psyched for their return and a vigorous press buzz was generated. Vosganian, Lodes and Daniel Kleffmann (drums) were eager to prove their concept could endure their hiatus, but they disappeared again until 2020 when they (finally) released their debut full length “Of Gods and Men.” Years (perhaps too many) in the making, their epic tale was presented as they always wanted. Was it worth the effort to make?
My first impression of “Of Gods and Men” was that I was floored by its technical range. That they could make a comeback out of nowhere was likewise impressive. The band intended for “Of Gods and Men” to stand alone to be appreciated by newer fans even if they never heard the early demos (which after all are out of print by now). Lodes in particular has become a gifted musician whose playing may convince you he deserves a place with underground metal’s most accomplished guitarists.
While I prefer his Mille Petrozza-inspired vocals from the band’s first demo, Vosganian has adapted vocals intended to be more theatrical to fit the revised lyrics and progressions. Speaking of which, I found the lyrics to be the most impressive aspect of the new versions of the demo tracks and the new songs. The mood of the lyrics is comparable to “Damien: Omen II” and Iron Maiden’s “Seventh Son of a Seventh Son” as they reflect the internal conflict and recurring self-doubt of the central character, making him a little more human, even after he, his purpose and eventual destiny is established.
Each song reads in a way that can almost contend with the legends of Robert E. Howard and Edgar Rice Burroughs. The harmonics, chord progressions and guitar solos are beautifully written and arranged, and the old and new tracks work well together. Sometimes there seems to be too much going on at once, and the time changes and transitions sometimes suffer as a result. Maybe the energy that mounted through all those years of preparation spilled over, making the band eager to show what they’re capable of. Despite this, there is tangible excitement and suspense as you’re never completely certain what turns the album will take next.
Reviewers have compared Maelstrom to Coroner, Iced Earth, Blind Guardian, Amorphis and Bal Sagoth; even Rush and Queensryche by Decibel Magazine. Whether or not you agree with those comparisons, this metal opera reaches beyond the universe, literally going into the realm of godhood. In an interview for The Drummer Guy Vosganian stated he and Lodes meant for “Of Gods and Men” to be conceptual in every respect: musically, lyrically and artistic scope-wise. Providing a strong sense of escapism they felt the world needed, Maelstrom take metal to a new theatrical level and redefine the narrative aspects established by bands in the past. –Dave Wolff
Lineup:
Gary Vosganian: Vocals
Joey Lodes: Guitar, bass
Ed Marks: Keyboards
Dawn Marie Macaluso: Female vocals
Daniel Kleffmann: Drums
Track list:
1. Arise
2. Army From Ash
3. The Mirror Calls
4. A Futile Crusade
5. Lament Of The Fallen
6. Th13teen Within A Circle
7. Thief Of Light
8. An Ancient Art
9. Predestined
10. SonRise
Posted by Dave Wolff at 1:36 PM