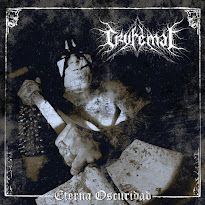 Band: Cryfemal
Location: Madrid
Country: Spain
Genre: Black metal
Full Length: Eterna Oscuridad
Format: Digital Album, Jewel Case CD, Standard Black Vinyl, Transparent Piss Yellow Vinyl,Half Transparent Blue / Half Clear with Transparent Blue Splatter Vinyl
Label: Immortal Frost Productions
Release date: June 26, 2020
As I write this review the sun is setting, the wind is blowing, and the rain is coming down accompanied by lightning and thunder. There couldn’t be a more suitable scenario for checking out Cryfemal’s latest full length “Eterna Oscuridad”. Cryfemal’s discography including eight full lengths stretches all the way back to 1998; this would take a lot of catching up so will have to be my first impression. A fan of the band described this album as being “pure evil from start to finish”. A pretty accurate description if you ask me. What first struck me about Cryfemal is how closely they resemble early Norge black metal bands such as Mayhem, Burzum, Emperor, Satyricon and Ancient (on “Svartalvheim”), especially in the low-ish tuned guitars and biting riffs. Maybe not be the most original album I’ve heard, but Cryfemal makes up for it with an unadulterated, brutal (dare I say brutal when describing black metal? In many ways it fits here) sound, a chilling climate and the most unnaturally ghastly vocals I’ve heard from a vocalist lately. Plus a healthy dose of the band’s own creative thoughts. Cryfemal wear it all well and “Eterna Oscuridad” is infused with sheer, apprehensive malignity that didn’t take much time to draw me into their insanity. An insanity that’s characterized by a feeling of old pagan spirits roaming in far-reaching snow covered timberlands. Keyboard sounds deliberately placed in the background suggests someone living somewhere in these timberlands, whose mind was long bedeviled to the point of brainsickness and psychopathy. Someone so crazy the Jersey Devil would make a point of steering clear of him. Think of “The Blair Witch Project” crossed with George Romero’s “Season of the Witch” (1972) and you’ll have a clearer picture of what I mean. This eerie effect is completed by chaotic solos and a vocal style that remind me of Mika Luttinen (Impaled Nazarene) on bath salts. Ebola couldn’t have done a better job personifying the insane freak I perceived on this album. To stand out more the band should work more on developing those aspects of their sound. –Dave Wolff
Lineup:
Ebola; Vocals, all instruments
Bornyhake Ormenos: Drums
Track list:
1. Capilla ardiente
2. Necra exequia
3. Insepulto
4. El retorno
5. Reencarnación
6. Lápida condenada
7. Culto a la muerte
8. Crematorio
9. Eternidad
Posted by Dave Wolff at 6:42 PM