Interview with Arelys Jimenez of MATIANAK by Dave Wolff 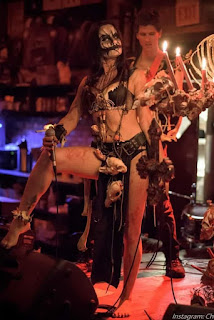 Do you have anyone in mind to hire as a stage actor for your performances? Are you partly inspired by any theatrical live bands such as Alice Cooper, Misfits or King Diamond?
I am friends with all sorts of artists, and I'm sure they wouldn't mind helping out. I am actually a big King Diamond fan and do enjoy their live shows. I respect when bands put out an amazing stage show. I am inspired by different cultures, styles and looks. A mix of all the music I like and movies based on different looks and costumes will inspire me as well.

Frank Garcia of Blood Of The Wolf has filmed some of your shows for posting on Youtube. How good of a job did he do capturing the essence of your performances?
He is a dear close friend to me and a master behind the camera. We have known each other for about four years. He captured well on not only the expressions but the live video vibe and feel but still keeping it natural. We work well together so he totally understand what I look for. I respect him and admire him greatly.
Where can Garcia’s uploads of your live shows be viewed, and how many hits have they received up to now?
If you Youtube search Matianak you will see several live videos. The more professionally made videos are his. Looks like total views are about 2,000 for the older videos and about 1,400 for recent videos from two years ago.

You and Garcia recently worked on a photo shoot; the photos can be viewed on Facebook and Youtube. How did they go? Are any future collaborations planed for the near future?
I did a model photoshoot in the summer of 2018. He has never photographed a model in his career; he asked me and I agreed to help him fulfill his dream and passion, and to experiment with natural lighting, shadows and camera lenses. You will find the shoot on Facebook, Youtube and Instagram along with the rest of his work and music career. It was really fun and we both had a great time. He spends most of his time downtown looking for great locations to shoot; we went to those areas and found beautiful spots for pictures. We plan to do more photography work. Several ideas have been mentioned, such as the magazine that will display my lyrics and have disturbing photography to tell the story from Non Compost Mentis. I also got creepy photography of me and some photo shoots of me and my dog. Kind of experimenting and helping to expand his portfolio with different ideas.
Do you have any ideas in mind for another full length album? Or perhaps a live release of some kind? How soon would you expect to start working on something new?
We are working on our new album this year. We want to record and release it this year but only time will tell. I want the images to match my lyrics on the booklet, to aim with nothing but photography and continue using realism. I do not want drawn artwork as it’s much easier to accomplished and overdone. I want to go into more of an interesting, creative way to express art. I have a few friends to collaborate on this type of project to be accomplished. I’ll hopefully get it started this year 2019 and be ready for 2020.
Anything you want to reveal about this new art project before it gets started? What sort of statement do you intend to make with it?
They are based on the same concept of real events and stories and capturing the overall feel of the psychotic and the insane. No statement is given besides showing and expressing of the corrupted, insane, psychotic people that have committed the most disturbing and creepy events. I will continue my search on the most disturbing stories I am able to find or witness.
How many songs are you currently working on for the next album? Will they be more intense and creepy compared to the last one?
We plan to have about six songs for the next album. So far we have three new ones. We always plan to step up our game and continue to be even more intense and creepy. It will be a slow progress but little by little Matianak will take its full form.
Matianak on Facebook
Matianak on Bandcamp
Matianak on Spotify