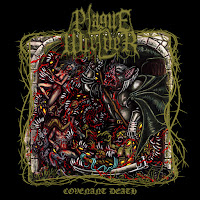 Band: Plaguewielder
Location: Ohio
Country: USA
Genre: Blackened sludge
Full Length: Covenant Death
Format: Digital album, digipak CD
Label: Disorder Recordings
Release date: April 2, 2021
What’s going on all, I’m back with another album review. Welcome to COVENANT DEATH by Plague Wielder!
So what I have in front of you today is an 8 track machine of an album featuring a lot of different elements (which I’ll get to in a bit) and with pacing not like much I’ve heard this year, it really sets itself apart as a record you could ultimately benefit from listening to in a closed space with some good quality headphones.
Let’s talk the ‘music’ itself.
On the genre it’s described as ‘Blackened Sludge’ which actually got me excited to experiment with but because of this album's unusual pacing and stylistic choices it has a variety of sounds and influences that (for me) range between:
-Black Metal
-Noise
-Sludge
-Ambient
-Metalcore
See, the first few songs of the album set up a more Metalcore sound with the mid to higher screams, the catchy and infectious guitar riffs, the intricate pattern of the drums and the generous use of the bass.
For me it’s in the third song and beyond where the true ‘Blackened Sludge’ comes into play, kind of caught me off guard to be honest but regardless those heavy trademark sludge instrumentation seeps through and the screams begin to take form in a lower register and the louder more technical aspect bares its face!
The Production
As I stated above, the first few songs took the context out but with the remaining six songs doing the album justice it’s really only a minor complaint in the ‘fluency’ department. I sat at the start that this is an album that would be best enjoyed in an isolated headspace because it has this strong ‘depth’ about it sonically that’s hard to pinpoint.
The music itself feels alive and emotional, it feels like you would be disrespecting the soul of the album by listening to it in a casual manner and so to truly understand the magic I highly recommend you either invest in your best headphones or be alone to pay attention to the sounds, lyrics and patterns presented!
In closing, a solid and almost ominous record but in the best way possible, it’s heavy, loud and gracious all at the same time. Go check these guys out and go support them at the links below!
https://plaguewielderohio.bandcamp.com/album/covenant-death
https://www.facebook.com/PlaguewielderOH
-Corban Skipwith
Lineup:
Bryce Seditz: Guitar, vocals, engineer
Jeff Wilson: Bass, synth, additional guitars, engineer
Tim Roberts: Drums
Track list:
1. To Dance With Wolves
2. At Night They Roam
3. A Death That Knows No End
4. One With The Shadows
5. Covenant Death
6. CRGP
7. Black Mysticism
8. Forever We Shall Be

Relentless Reviews With Corbz
Posted by Dave Wolff at 5:08 PM