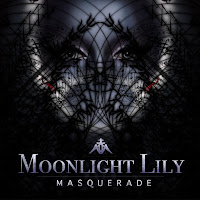 Band: Moonlight Lily
Location: New Jersey
Country: USA
Genre: Alternative metal
Single: Masquerade
Format: Streaming
Label: Independent
Release date: May 20, 2021
Moonlight Lily from New Jersey offer a mix of gothic metal without too much darkness and alternative rock without inane lyrics. There are shades of groove and emo metal written into their debut single, eased into the songwriting rather than being forced in. Being a multicultural band with members from the US, Puerto Rico and Serbia, Moonlight Lily subtly acknowledge the broadening of national diversity in “Masquerade”, merging their ethnic backgrounds into a highbrow, emotionally driven single, placing them many years ahead of politically correct television and publishing, making it plausible that by working together they actually achieve something. Overused jargon and labeling is discarded as the irrelevant triviality it is, as with this one track the band creates a tune making their influences of thirty years neoteric and unseasoned. As much as each musical facet of “Masquerade”, the vocal style and lyrical content of Blue Maddox as she crosses reality with unreality, setting love stories in unseen dimensions as far beyond the physical world as many poets and philosophers dream. These realms are real because they’re made real, with imagination as its anchor. Blue shows a lot of poetic license singing “Watching the sea of sorrows drowning in your eyes, I find the last tomorrow reaching for the skies”. Her words tell of someone who left the physical world behind to lose herself in an endless masquerade on the spiritual plane, caught in a beautiful purgatory of sorts in which longing exists forever but fulfillment is beyond reach. The way it’s stated is soaring with enough mournfulness to remind you this is a perpetual fairy tale. –Dave Wolff
Lineup:
Jenna: Piano, keyboards
Ed: Guitars, bass
Blue Maddox: Vocals, lyrics, synths
Posted by Dave Wolff at 1:58 PM