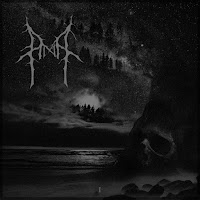 Band: Angr
Country: Russia, Belarus
Genre: Black metal
Full Length: I
Format: Digital album
Label: Independent
Release date: December 18, 2021
Once again we find ourselves in the grips of ‘Black Metal’ a subgenre so dark in nature yet so lively in presence, distribution and global influence. This time around though we have a two man line up
-S. (instrumentation)
-Corpse (Vocals)
And let me tell you now, this duo is here to make a wave unlike anything I’ve heard in a while regarding this subgenre.
First of all, I can tell by the vocal performances and the certain breakdown instrumentation and brutally executed production that they have mixed various elements such as
-Grindcore
-Noise
-Death Metal into the mix to create the alcoholic stepfather of Black Metal and help unleash this violent beast into the art that is music. Firstly how much more of a badass statement can you make than to make your introduction song over thirteen minutes long! If that doesn’t tell you they are here to kick the sonic door down then I don’t know what will.
Throughout the whole listening experience I love how they are careful which elements of the various styles mentioned above that they use and which they don’t, this album isn’t just a random collection of five tracks put together at will, no this was carefully calculated and cerebrally crafted to bring out the most disturbing and emotionally gruesome sounds possible.
In some parts of a song you’ll hear that animalistic growl that your use to hearing in Grindcore, in others that trademark raw, lo fi quality sound of pure, unadulterated Norwegian Black Metal and in others you’ll hear the savage execution of what Death Metal has to offer with those sadistic guitar riffs and hellish drums to pair.
Honestly, when it comes to bands putting their own take on Black Metal (with the exception of a band like Liturgy that seems to be stirring up the extreme pot of Black Metal in quite the controversial fashion), mostly its bands infusing the subgenre with things like
-Folk
-Ambient
-Orchestral
-Symphonic
-Groove Metal
I’d say it’s very rare that a band would use Black Metal as a base to go even more heavier and extreme! It’s quite the idea to pull off and especially to pull it off as creatively and technically sound as these guys have but they did it and did it near flawlessly!
I encourage every metal fan on the group to go check this record out and share this review to everyone and anyone you can! –Corban Skipwith
Lineup:
S.: Instrumentation)
Corpse: Vocals
Track list:
1. Ymir
2. Restless god
3. Light of black flame
4. Hesychasm
5. Epiclesis Apocalypsis
Facebook: https://www.facebook.com/Angrrrrrrr
Youtube: https://www.youtube.com/channel/UCd4Kbl0a0l3TkkP2M1pLn8Q
Soundcloud: https://soundcloud.com/an-gr-426296640/sets/angr-i
Spotify:https://open.spotify.com/artist/1rar0D2FTJ9qTHT9cYE6Me?si=0x-4ZKY8Sx-SjuLwodmFxQ
Posted by Dave Wolff at 2:48 PM