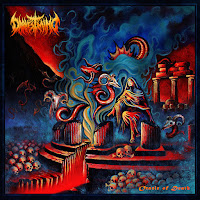 Band: Darkest Mind
Location: West Flanders
Country: Belgium
Genre: Melodic black metal
Full Length: Oracle of Death
Format: Digital album, jewel case CD
Label: Immortal Frost Productions (Belgium)
Release date: December 10, 2021
Who’s ready for some good old fashioned Melodic Death Metal! (I know technically it’s advertised as a Black Metal album) but based on the sounds I hear a lot more Death influences than I do Black! Darkest Mind (Oracle Of Death).
So, ladies and gentlemen this is the debut album by the band that was released on the 10th of December 2021!
I have to say, there’s a lot going for this album over the 7 song track list that I think a lot of people will enjoy and vibe with!
For example that stunning production! Woo! Talk about stunning! This project sounds crisp, it sounds fresh and vibrant! See what (some) people don’t understand is that when it comes to production there are so many variations and forms to consider.
For example, bands from the late 80’s early 90’s Norwegian Black Metal scene had this trademark low quality, raw aesthetic to their production in order to complement the dark, disturbing sounds they were bringing to the table and so that style was justified.
On the other side of the spectrum you have artists who just like this one fall into the ‘melodic’ subgenre of metal whose production quality is meant to sound ‘extravagant’ and ‘larger than life’ as they are trying to compliment a certain style of metal that is more shall we say ‘glossy’ in nature for lack of a better term.
This doesn’t imply that if any other band used this style of production that it would work or make sense, production like this is good for the sound they are trying to convey.
This album is an Adrenaline filler roller coaster with lots of action packed, head banging action that I’m certain will keep even the most hardcore metal fan satisfied! Shredding guitars, slamming drums and bass!
I will admit the vocals are the one aspect of the album that I think identifies with Black Metal as it does have that trademarked growls and screeching nonetheless great vocal work!
Look, this is an album from last year that you don’t want to miss! It’s hard hitting, melodic, fast and intense! The perfect combination for all metalheads! –Corban Skipwith
Lineup:
Yuri D: Lead guitars, bass, vocals
Glenn D: Guitar
Hammerman: Drums
Track list:
1. Shadow Of Life
2. Oracle Of Death
3. Prophecy Of The Stillborn
4. Awakened In The Cold Winter Eternal
5. Evoked By The Moon
6. The Indomitable Decay
7. Queen Of Poison And Lust
Posted by Dave Wolff at 1:15 AM