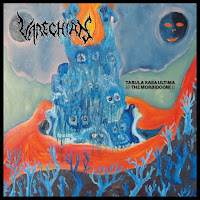 Band: Varechian
Country: France
Genre: Experimental black/death metal
Full Length: Tabula Rasa Ultima /// The Morbidoom)))
Format: CD, digital
Label: Sliptrick Records (USA, Latvia)
Release date: October 26, 2021
Five years in the making after their full length debut “Coldead Marble Memories”, Varechian unleash an album that Sliptrick Records states will devour you alive, mind and soul.
The mystical themes and aural experimentation explored on “Tabula Rasa Ultima /// The Morbidoom)))” establishes this French band in a class by themselves. This is made even more evident by elements of ambient and industrial added to their blackened death metal, and the unexpected grooves added to the fierce severity with which they recorded the songs. If you’re expecting sameness for one reason or another, you’re bound to be blindsided, bewildered, horrified and eventually unhinged by what’s presented here.
I haven’t quite heard musicianship like this from a French black/death metal band, musicianship with bizarre effects and a mechanical sound thrown into the guitars. I don’t know how they managed to achieve this in the studio but the outcome of this innovation sounds like something organic that was somehow inflected with computerized matter from who knows where, infected to the point where it’s no longer organic but can’t be considered mechanical either. Something like a refined hybrid of both human and machine.
Even the vocals insinuate such a being has been spawned from this marriage of human tissue and machine parts. This is the closest I can come to describing the music composed by the band and recreated for consumption. It’s as if Mayhem were reincarnated into the universe of Blade Runner and Blade Runner 2049 and reborn as replicants for the Tyrell Corporation. There are so many bizarre cacophonies accompanying all of the musicianship and its severe delivery that this album really does threaten to consume you.
So how does all this tie in to accounts of dark magic, arcane spells and invocations of death? I’m not sure about this but the album’s recurring theme is said to be the average human being’s desire to conceal his inner darkness. So between the lyrical concept and the musical quality I’m guessing the suppression of our darker sides takes something human from us, leaving something nonhuman and empty in its place. But our darker sides will always reveal themselves sooner or later, in one form or another.
An unorthodox recording from a band with an individualized point of view about humanity, “Tabula Rasa Ultima /// The Morbidoom)))” is to check out if you’re seeking extreme metal that takes the term extreme to new inventiye levels. –Dave Wolff
Lineup:
Mathrien D. Aka Ludo Putrid: Lead and rhythm guitars, drums, keyboards
Anton Supremacy: Guitars, bass, keyboards
Regis 7.7.7 Whyte: Vocals, keyboards
Track list:
1. Fucus Effluvium Varechian Genesis
2. L’Ancien Monde
3. Astrum Argentinum
4. Neikromanteion Of River Acheron
5. Dead Tavern
6. Still The Warmongers
7. Mutant Humans Regression
8. So Sick, In Solaize
9. Re-entering Purgatory
10. Neikromanteion Of River Acheron (Bonus)
11. Still The Warmongers (Cybercore Industrial Remix By Grosso Gadgeto)
Posted by Dave Wolff at 3:35 PM