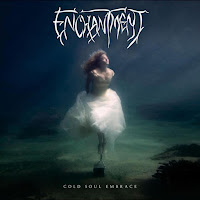 Band: Enchantment
Location: Blackpool, Lancashire
Country: England, UK
Genre: Death/doom metal
Full Length: Cold Soul Embrace
Format: CD, digital
Label: Transcending Records
Release date: June 24th, 2022
It may have been twenty eight years since Enchantment released their album “Dance the Marble Naked”, but it was groundbreaking for death and doom metal, far ahead of its time. Their time having come around again, the band presents more of the innovation that set them apart from the rest of the English metal industry. Like Napalm Death, Cradle of Filth, My Dying Bride and Paradise Lost, they set out to establish what hasn’t been tried and successfully pull it off.
Compared to the acts I listed Enchantment were relatively obscure and overshadowed when “Dance the Marble Naked” was released in the early 90s. While I can’t predict this will change with the release of “Cold Soul Embrace” they prove once again they’re deserving of greater recognition beyond the shores of their home country.
Imagine if Messiah Marcolin and Candlemass ingested massive amounts of steroids and LSD before recording a new album and there you have “Cold Soul Embrace”. The sound and production are colossal and polished without any ill effects on the heaviness they sought to capture in the studio. This furnishes every lyrical enunciation, note and drum hit with the impact of a sledgehammer smashing you full force across the chest, pummeling you consistently and mercilessly.
“Cold Soul Embrace” might even be considered too heavy if you don’t have the resilience to withstand the persistent hammering and profuse outpouring of emotion coming with it. The addition of acoustic sections, piano and keyboards help to ease their tendency to write heart rending progressions. Enchantment has an unwavering tendency to come across as plaintive and tragic while channeling their songwriting, but it’s so felicitously executed it gives the “beauty in darkness” concept new proportions.
The inventive ideas presented on “Dance the Marble Naked”, while being memorable, sometimes leaned toward being temporary as the band moved from song to song. On “Cold Soul Embrace” these elements are steadier, more congruous and more well thought out as bands can come to arranging their material, even after years of inactivity.
Songs like “Of Glorious Vistas Forgot”, “In A Cello-Felt Glare” and “The Beauty Of Liars” in particular sound like logical progressions from past releases, tightened, smoothed over, more structured and more elaborate. Taking these steps on their own, Enchantment’s work organically grows into something with potential to intrigue fans of gothic and classical metal as much as death and doom. This is the kind of spontaneous growth that outlives musical trends, underground of mainstream. –Dave Wolff
Track list:
1. As Greed As The Eye Beholds
2. A Swanlike Duet
3. Painting Amongst The Feathers
4. Of Glorious Vistas Forgot
5. The Wake Of The Hollering Tide
6. In A Cello-Felt Glare
7. The Beauty Of Liars
8. One Jump Of The Sun