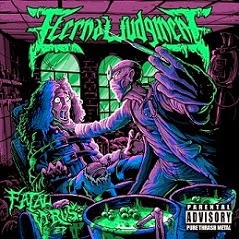 ETERNAL JUDGMENT
Fatal Virus
Independent
Eternal Judgment, a thrash band from Quebec, Canada, has been around since 2008 and their sources of inspiration are “society, anger, power, war, religion, parties, beer, speed and thrash.” No shortage of angst (or the reasons for it) here but the manner in which they channel it balances enough energy to provide a healthy release. There’s nothing in particular the band seems to single out writing their anti-societal lyrics, just general objections to society’s ills. I’m not certain whether Fatal Virus is their first release or if others were released beforehand, but it displays tightness and promise. It’s possible I’ve listened to a lot of groove-laden thrash of late, but I perceived slight hints of groove briefly appearing on Fatal Virus, but don’t expect too much of it. They’re mostly in the title track introducing the EP, followed by four songs striving for epic NWOBHM style territory. I was reminded of Anthrax and Testament, two bands I listened to often in my youth. This band had that unspoken quality that kept me young as the EP unfolded. Eternal Judgment sound eager to write epic material; the riffs written for “Powerdrive,” “War Planet… Prisoners Of Hell,” “Kill To Survive” and “By My Own” make intensive headbanging sessions. “Powerdrive” particularly contains that epic quality, clocking in at just under seven minutes, assaulting the listener with one progression after another. “War Planet…” features some interesting time changes, switching moods unexpectedly in the course of four and a half minutes. There is an untitled bonus track at the end; to me it sounded a little more melodic than the previous songs I heard. The cover art of Fatal Virus is as memorable as what lies within. -Dave Wolff