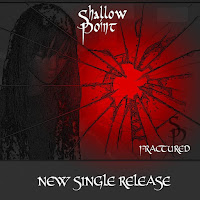 SHALLOWPOINT
Fractured
Independent
http://shallowpoint.bandcamp.com
As someone who has been keeping up with Shallowpoint from the beginning, through corresponding, reviewing and interviewing, I know this band is doing something exclusive and a becoming representation of Tennessee metal. Crome Molly, Warclown and Belfast 6 Pack all helped put the local scenes in Knoxville and Lenoir City on the national map as much as this band, so has Twisted Hillbilly magazine and an internet radio station that was active a few years back called Deviants Underground Radio (this was likewise covered by me). Shallowpoint have had strong roots in Southern rock and incorporated it into their style without making it sound dated. Their addition of keys and electronic sounds into their recent material serves to enhance their work without watering it down or taking away from their origins in rock and metal. Independently creating a buzz on the net through a series of lineup changes, the core members of the band (guitarist/vocalist Chuck and bassist Heather) put a lot of work into refining themselves while releasing and promoting all their work independently, without label advertising of any kind. The band’s current lineup includes guitarist Heath Devine and drummer Doug Jones. Their latest single Fractured, released last November, brings to view the maturity they have gained since forming in the early 2000s. Heavier than their 2013 release infringement, the song has keyboard and electronic sounds in an increased amount of layers worked into the song structure much more subtly. The opening riff has a more prominent bass sound and a carnivalesque feeling, next to a drum sound that comes across as tribal, with more of a presence in the mix. These elements are joined together to form a secure background to the lyrical theme of loss and longing fans of the band have come to know. This last is not to be confused with emo or screamo or whatever the media is pushing as metal these days. The verses and chorus has more in common with the desire for fulfillment than self pity for its own sake. Rather than raise the generic question of what emo bands have to be miserable about, I’ll point out that the sense of loss is easy for listeners to relate to if they’ve been in relationships that have gone wrong. If you’re just now hearing of Tennessee bands, Shallowpoint would be a good band to start with. -Dave Wolff