Video Review: SLECHTVALK We Are by Simon Brown 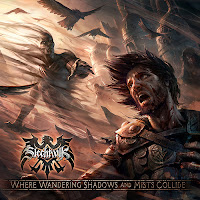 SLECHTVALK
We Are (official lyric video)
From their latest full length 'Where Wandering Shadows and Mists Collide' released December 20, 2016
Taking a huge leap of inspiration from modern Dimmu Borgir (with a restraint in keyboards) and Amon Amarth, Dutch quintet Schlectvalk present their latest offering. Taken from the release “Where Wandering Shadows and Mists Collide,” the single “We Are” gives a perfect indication of the modern blackened death approach this band delivers upon. Production is clear with all instruments defined as the listener should expect. Soloing adds a nice touch but doesn’t really stand out as a highlight. This is because it feels almost expected there should be a solo as part of the commercial approach the band undertake. Vocal lines are rasped in the style made famous by modern Dimmu Borgir releases. Probably the highlight of this release for were some nice bass hooks and the percussion. This is also a double-edged sword as with this style, the drums are almost always over-produced. Thankfully it is not too prevalent in this example. Not a bad release, in fact very well executed. Hopefully this band showcase more of their own style without leaning so heavily on the Dimmu Borgir/Amon Amarth stylistic tendencies. Worth a listen. -Simon Brown