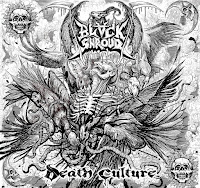 Band: BLACK SHROUD
Place of origin: Northwestern Ohio, USA
Genre: Black metal
Full length: Death Culture
Label: Independent
Release date: January 12, 2019
Black Shroud is a four piece act from northwestern Ohio, USA. They self-released their debut album, Death Culture, on January 12, 2019. It’s a concept album about various funeral rituals around the world.
It’s familiar in that Black Shroud aren’t doing anything new, but they do create a really exciting album of blackened metal. As it develops it seems to get darker and more horrifying, leading to a final doubleheader that drags you deep under the murky waters. Inhuman and Endocannibal sees Black Shroud focusing all their evil energy toward leaving you battered and bruised.
With incredible power, the wall of sound sweeps away all your fears and unnecessary thoughts regarding this path. While you are listening to these compositions, real chthonic evil sprouts from its roots, becoming monumental above all others. The ideal manipulation of their capabilities, the blinding beauty and tension of these compositions, poisons everything around them.
They don’t waste much time with showing the world what they have to offer with the seven minute track “Tower of Silence” or the next song, “Immolation of Souls.” Meditative passages hypnotically take the mind far beyond the limits of the universe, and un-rhythmic pieces take it deep into the ground. The mid-tempo parts turn you into a sentry silently watching the madness around you, and the reign of Death around you, unable to do anything about it. Dynamic and powerful.
I have to say a little about the production of this material. The crisp, layered and incredibly heavy sound fits perfectly into the concept of this album, complemented with radical, opulent colors of the world where Death reigns with intolerable suffering and doom.
A decent debut work. The group is clearly planning further active development. I hope so much that we will also be given the opportunity to hear new material from Black Shroud. More Chaos, more blackened music, more of this blackened world! -Serafima Okuneva