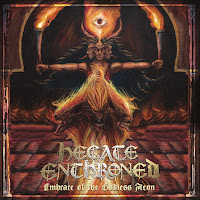 Band: HECATE ENTHRONED
Place of origin: Manchester, England/Wrexham, Wales, United Kingdom
Genre: Melodic black/death metal
Full Length: Embrace of the Godless Aeon
Label: M-Theory Audio
Release date: January 25, 2019
‘Embrace of the Godless Aeon’ is the latest CD from Hecate Enthroned. Putting it simply, it’s a masterpiece of streamlined black metal with enough razor-sharp guitars, searing vocals and rich atmosphere to do justice to their twenty-four years. With a new black metal scene emerging in the United Kingdom, with new musicians espousing new ideas, it seems fitting for Hecate Enthroned to return after the five-year blackout that followed the release of Virulent Rapture. The pagan mystery of U.K. black metal hasn’t been lost to them since 1995 ushered in their demo ‘An Ode for a Haunted Wood’ and their debut full length ‘Upon Promeathean Shores’ (Unscriptured Waters). Though they haven’t achieved the popularity of Cradle Of Filth and Dimmu Borgir since then, they have become their own entity and reached new heights of histrionic, breathtaking music. ‘Embrace’ returns you once again to the vast woodlands of England, where there are still more tales to be told. Fans say it is a return to form and essential listening; I’m inclined to share this sentiment as it exhibits melancholy, despondency, sorrow, excitement and elation with ceremonious conviction. The intro track ‘Ascension’ promises a profound statement overflowing with interchanging sentiment and romanticism that equals and, in some ways, surpasses Cradle in magnitude. Vocalist Joe Stamp elevates you to the apex of exultation and descends you to the deepest depths of remoteness, as the interplay between the guitars and keyboards unleash riotous symphonic hurricanes that leave you astounded in every respect. Soprano vocalist Sarah Jezebel Deva who has worked with Cradle makes an appearance on ‘Goddess of Dark Misfits,’ one of the finest moments of this album as the band takes new conceptual and aesthetic steps forward. Good production is needed to present of all this. The band and Dan Abela make sure every note and drum hit is crystal clear and every song reaches its full potential. ‘Embrace of the Godless Aeon’ is well worth the five year wait. Run don’t walk to pick this up as it’s already a classic. -Dave Wolff