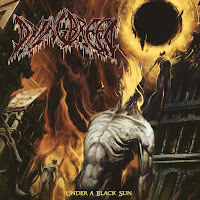 Band: DYINGBREED
Place of origin: São Leopoldo, Rio Grande do Sul, Brazil
Genre: Death metal
Full Length: Under A Black Sun
Label: Black Hole Productions (Brazil)
Release date: December 17, 2018
On a freezing cold night at the very end of January, I have been sent ''Under A Black Sun'' by DYINGBREED. As bone chilling wind licks my bedroom window, I sit in my humble abode with this release blaring through my speakers. The first thing I will mention is that this band reminds me of musical endeavors such as Krisiun, Skinless, Deicide and late-era Dying Fetus. DF is one of my all-time favorite death metal bands, so this coming from me should be a monumental compliment. The production quality is high end, and the content and structure within this release is just as pleasing. The guitar is heavy and technical with vicious solos, the bass slamming along with low-pitched perfection. The drums are well played and on time, adding to the overall quality of the tracks held within. As for the vocals, they range from deep gutturals to higher pitched shrieks and wails, showing an array of depth and range. In places, there is a bit of melody... maybe even a bit of harmony, though the heaviness and brutality far outweighs this aspect of the music. I pondered for a bit trying to pick out a favorite track, but I can honestly say that all of the songs are ''more than good''. Another thing I can mention is the cover art. The artwork is visually pleasing, showing a certain degree of artistic talent. The logo is also pretty awesome! There is not much more to be said, except that anyone that loves death metal or any other forms of brutal and unrelenting music should really give these tracks a spin. You will not be displeased! As far as death metal goes, I will give this release a ten out of ten. The sound may not be entirely original, but the quality and musicianship is almost breathtaking in a grotesque way. I will for sure be checking out more tracks from these guys in the future. Great job, DYINGBREED! Keep up the sickness! -Devin Joseph Meaney