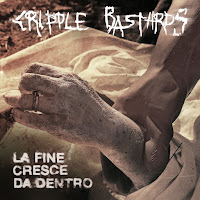 Band: CRIPPLE BASTARDS
Place of origin: Asti, Italy
Genre: Noisecore, grindcore
Full Length: La Fine Cresce Da Dentro
Label: Relapse Records
Release date: November 9, 2018
It is just before bed and I am finally getting around to listening to this release, La Fine Cresce Da Dentro by Cripple Bastards. When it comes to listening to Cripple Bastards, this is not my first rodeo. I originally heard of these guys back around 2003, when I made a habit of browsing Braindead Webzine. I heard of many bands and projects from this zine, most of which were/are great examples of vicious grindcore and goregrind. Just like their earlier musical endeavors, La Fine Cresce Da Dentro proves to be a surging force of pure grinding carnage. The vocals are powerful and ferocious, pushing forward in an ear-shattering tumultuous frenzy. The guitars are played well, with speed rivaled by very few. The drumming is fast, primal, and almost herculean in the sense that you would need to have a certain degree of brawn to pull off such relentless blastbeats. The songs are very sporadic, ranging from only a few seconds to around five minutes in length. This does not matter much, as the length of the tracks has nothing to do with the talent and fury held within. Unlike earlier releases from this band, these tracks have a slight eerieness about them in places. Technicality also adorns La Fine Cresce Da Dentro, a quality that is not always present in grindcore music. Fans of thrash and crust may also dig these guys, as hints of both sub-genres are audibly present. Hailing from Italy, this is a great band, and I suggest anyone interested in music with any amount of force and brutality checks this out... and soon. Cripple Bastards are to Italy what Napalm Death was/is for the United Kingdom. This is top tier grind, and when you listen to this, it will leave gaping chasms where your eardrums used to be. Just do yourself a favor and listen to it; it's worth your time! -Devin Joseph Meaney