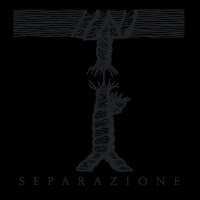 Band: OTHISMOS
Place of origin: Montepulciano, Italy
Genre: Blackened noise crust punk
Full Length: Separazione
Label: Independent
Release date: December 7, 2018
It is just before ten o'clock at night on a Monday evening and I am finally getting around to checking out this musical atrocity, Separazione by Othismos. This band was ''Formed in late 2009, without any perspective or expectation'' as it says on their Bandcamp bio. It is really hard to pin-point a specific genre on this release, but it sounds to me to be an obscure mix of metal and relentless hardcore. In places, this outfit reminds me of the band Arabrot. Another band I could liken the music of this ensemble to would be Heavy Heavy Low Low, a band which has put out such classics as ''Tell Shannon Her Crafts Are Ready'' and ''Vaginal Blood and Construction Paper Cigarettes'', though Othismos has a more metallic sound without question. It says on their Bandcamp that Othismos carries the torch for acts such as Wretched, Nerorgasmo, Negazione, Indigesti and Sottopressione, though this is the first time I have heard these titles. High pitched shrieks and merciless vocalizations adorn this release, giving a ''balls to the wall'' approach to screaming. The guitar work is fast in places, but also slows down giving the listener a vast ''list'' of delectable playing styles. As for the drums, they are played well, pushing forth in the background keeping everything in perfect time. While sometimes the music sounds off-tune, this just adds to the tone and atmosphere that these guys project. All in all, I have listened to this release three times in a row now and I can say that each playthrough has been more than enjoyable. Although these are not the best tracks I have heard recently, they are pretty damn close. Othismos is clearly a very talented band and they get an A+ for effort and awesomeness. Great stuff, guys. I hope to hear more from your magnificent band in the future. Rock on! -Devin Joseph Meaney