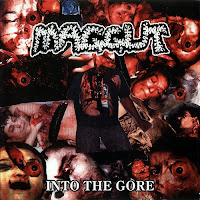 Band: MAGGUT
Place of origin: Osaka, Japan
Genre: Death metal/grindcore/goregrind
Full Length: Into The Gore
Label: Bloodbath Records (Japan, Vietnam)
Release date: 2004
Normally I would try to review newly released music, but today I am taking a step back in time. I introduce to you Maggut, one of my all-time favorite Carcass clones. ''Into the Gore'' by Maggut is a filthy, wretched and vile goregrind release, with vicious splattery vocals that pulse forth from your speakers with a vengeance. The vocals sound as if they were recorded in a sewer by a cannibalistic humanoid underground dweller. As for the drums, they are fast and chaotic, pounding along in the background in true grinding fashion. The guitars are tuned low, and sincerely manage to prove that this band can fucking shred. The production quality is just how I like it. Not too high end, yet not lo-fi to the point that the music is barely audible. The song titles are one hundred and fifty percent gore... a monument to Maggut's catchy and vulgar brutality/sickness. I will say that Maggut pulls off that gore-thang ALMOST as good as Symphonies of Sickness era Carcass... almost. Few things are better than a grinding opus such as this, and I will continue to listen to this release time and time again. Like carrion flies to a bloated corpse, gore grinders should lap up this festering pile of awesomeness. Maggut forever! -Devin Joseph Meaney