Full Length Review: BEASTIAL PIGLORD “Pulling a Thread from the Fabric of the Universe” (Slorebs Castle Records) by Dave Wolff 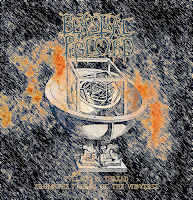 Band: Beastial Piglord
Location: Kinston, North Carolina
Country: USA
Genre: Extreme metal
Full Length: Pulling a Thread from the Fabric of the Universe
Label: Slorebs Castle Records
Format: Digital
Release date: December 31, 2019
If Venom, Blasphemy and Abruptum collaborated on a musical project, what resulted from their collaboration might have sounded like Beastial Piglord. This is an apt enough description of the latest from this one-man band, “Pulling a Thread from the Fabric of the Universe.” Last August I reviewed their album “Sunder”, noting its similarities to Controlled Bleeding and comparing it to a great beast welcoming you to the abyss from a distance. On this album the beast is at your doorstep. While proclaimed experimental extreme metal, “Pulling”  is an album where the Abruptum influence is most obtrusive, albeit with less physical torture and more excessive brutality. Whether foundng member Hudson has earned having this project the title of death metal’s answer to Abruptum, inasmuch as there are no other bands I’m familiar with approaching this summit Beastial Piglord is a certain aspirant for the title. If anything else, “Pulling” is one more barefaced example that brutal and extreme music can divaricate from recognized specifications, in any manner the musicians prefer according to what speaks to them, what they wish to express and what fits their music. The term “no rules” as it applies to underground bands searching the known and unknown to distinguish themselves here. Hudson presents his material with a wall of sound that should be played with as much volume as you’re comfortable with to take pleasure in its mania. Doing so will reveal multiple layers of pure sonic chaos coming together to create a Dantean personification of hell. Hudson’s use of sepulchral echo to enhance his glottal vocals and mask the disturbing sound effects and feedback, turbulent solos and substratal drumming has an effect that’s more subjective than intellectual, growing on you until it becomes something not even human. While past albums tottered on the edge of insanity, “Pulling a Thread” leaps right off, taking you along for whatever is waiting. -Dave Wolff