Interview with G.D. Fangs of HIDEOUS MONSTER by Dave Wolff 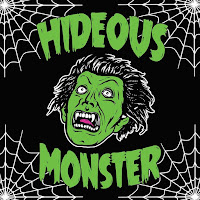 Hideous Monster is described as four talented musicians creating something bigger than the sum of its parts, combining old school Misfits with Vincent Price’s filmography. Explain how the band formed.
I decided to get back into the music scene again after taking a break from being in different bands. The Quintessentials was the last band I had played guitar in. So I wanted to write music about Horror/Paranormal topics. It's a cool topic for music, because there are not a lot of rules for Ghosts, Monsters, Vampires, Zombies etc., so you can get as imaginary with lyrics and music as you want without anyone questioning it. I actually found most of my band by recommendations from mutual friends, except our singer Jamie Warlocks who I met online. He stepped right in and fit the shoes for lead vocals. The material is unique in the sense that this band can fit in with rock bands, rockabilly bands and even some metal bands. We have opened up for bands from The Legendary Shack Shakers to members of The Misfits and LA Guns just to name a few. So it’s original enough to fit different genres.

Why did you decide to spend time apart from the local scene after your involvement, and what eventually rekindled your interest in being a musician?
I took time from the music scene because I thought it was stagnant and oversaturated with bands; it still is to this day. It’s hard to get off the ground no matter how good you are. People do not have the attention span they used to have, and everything is so quick and disposable with today’s technology. I think what really got me back in the music scene was really my love to play music. I love writing music and I still love playing guitar. So I will keep going.

What bands besides The Quintessentials were you and the other members involved in before Hideous Monster? Did those bands release any material while they were active?
Our drummer Jack T. Ripper played in a progressive style band for a while. Our bass player Miss Tenderloin has played in many different kinds of bands. She is a very talented musician. Our singer Jamie did the Seattle music scene back in the day. I played in a Motley Crue tribute band for a few years called “Live Wire.” We even ended up suing each other and had our court case on “The Judge Mathis TV Show.” If you Google it, it still comes up as one of the most liked episodes of all time. I believe Motley Crue’s people had it pulled down for unknown reasons, haha. Hideous Monster as a band is a makeup of four different people for sure.

What is the story of your Motley Crue tribute band suing one another on Judge Mathis? Also, what do you think of tribute bands as a whole?
Well basically it was a control issue. I created the band “Live Wire” and as soon as we gained popularity getting decent offers for shows, certain band members got greedy and wanted to control the band by kicking me out. That started the lawsuit. Judge Mathis gave us a call when they saw the lawsuit on the docket to be on the show. As far as what I think of tribute bands as a whole, I guess if you want to make a fast dollar playing other people’s music, go for it. I personally do not care for it, but that's just my opinion.

How does your experience in other bands help the band’s sound?
We all met through mutual friends. I approach Hideous Monster’s sound just by love for Horror movies and life. Life can be very scary, strange and weird, so there is no shortage of content for scary stuff haha.

Is there an approach to your writing horror based and paranormal lyrics that differs from other bands you’ve heard?
My approach is usually based on life experiences, or emotions. Anxiety, depression, happiness, and sadness, childhood memories, my spin on a horror movie or a fear, or whatever vibe I can bring to the table that makes people think about life or the paranormal. A lot of times songs can write themselves, depending on what I am feeling when I am in the mood to write music. There are no rules in music. That’s what makes it great.

Which horror movies, television programs, or magazines do you draw inspiration from?
There really is not a particular movie or show I write about, but just the vibe or my spin on what horror rock should be. Hideous Monster has definitely found its own sound. I really love late 70’s early 80’s Horror; I think it’s the best era for that genre. As far as magazines go, when I was a kid I read Fangoria and Starlog. Those were some cool magazines and I still collect them. If I had to pick an all-time favorite horror movie, Dawn Of The Dead is incredible, I saw it in the theatre in 1979. It really made an impression on me; no one had seen a zombie movie like that. The Exorcist is a close runner up.

What about Dawn Of The Dead made an impact on you when it was released? Was it’s intended message about corporate greed and consumerism still relevant in 2019?
I really didn’t get the message back then. It just scared me because it was pretty graphic, lots of blood and guts. There is always greed in the world; it’s human nature to always want more.

What fascinates you about Vincent Price’s work as a character actor and performer? Do you see he still has a certain amount of influence on today’s actors?
Vincent Price was just a great actor. His amazing voice held people’s ears captive; he knew how to play the part and draw you in. They do not make them like that anymore. I am not sure about seeing his influence on today’s horror actors, although I am sure they would have to have a great appreciation for him.

How extensive are your collections of Fangoria and Starlog? Why do you think those publications managed to remain relevant for so many years?
I have a small collection of both. It was entertainment back when there was no internet. So you really only found out about horror and sci-fi through magazines like that. I believe it was the quality and love that went into those magazines that kept it relevant and in demand for so many years.

Were you reading classic horror comics around the time you discovered horror, such as Eerie or Creepy, or others? If so, what stories left a lasting impression and why?
Actually, my sister always took me to the movies I five years old. She was fifteen so I get to see horror movies at a very young age. When we went food shopping with my mom, I was allowed to purchase a comic book and I always picked out “Tomb of Dracula.” “Werewolf by Night,” “Dark Shadows;” pretty much anything that looked scary. Monster toys were super popular in the 70’s so it was easy to find a monster model kit to put together. They had Monster figures to collect and cereals like Count Chocula, Boo Berry and Frankenberry. I still eat them for breakfast sometimes to this very day. That’s pretty much where I discovered and fell in love with monsters and horror.

Do you look toward any classic or modern horror literature for thinking up song lyrics?
I actually look back. There is a ton of stuff out there that is interesting from the 70’s and 80’s. It was such an optimistic time back then, so there is a lot of cool literature and artwork movies. Monsters from that time period that really cannot be replicated today. The late 70’s/early 80’s were my favorite eras for sure. I do not think we will see a time like that again.

Name some of the authors you read and describe what speaks to you about them.
I like to read about religion of all kinds. There is a lot of messed up and crazy things have taken place in the name of religion. There are also a lot of fascinating and wonderful events that have taken place. I read The Bible, I have read The Satanic Bible, amongst a lot of witchcraft, and Pagan books. All these books have some sort of truth to them; it really makes me wonder. There is a lot of inspiration for song content and music from Religion.

What other movies from the 60s, 70s and 80s had the most profound impact on horror cinema?
Here would be my top five: 1. The Exorcist, 2. Jaws, 3. Night of the Living Dead, 4. Friday the 13th, 5. Halloween. I think those are the big ones; there are definitely more.

How much free reign did the band have when composing the songs that appeared on “Sounds That Make You Shiver”?
I pretty much write the music on guitar, I put lyrics to it, and then I have our singer go over and make adjustments and look at it with a different set of eyes. Then it gets hashed out at practice until we get a complete song.

How long does it usually take for a song to be completed? Do the other band members go over the song structure during this process?
It can take one band practice or many practices. We try to work on material all the time. It's always an adventure writing music because there is no rule book for it. Everyone has a say in the process; we just keep bantering it out till it sounds good,

Describe the recording process of “Sounds That Make You Shiver” when the band went to the recording studio. Did you produce it independently or did you search for a producer you felt could make the material sound the way you wanted it?
I produced it at Falcon Studios here in Portland. Or Dennis is a great studio producer that recorded us. He has worked with acts like “Curtis Salgado” and “Pink Martini.”

List the songs appearing on the EP and how your lyrical influences impacted them. Did the lyrics come out the way you envisioned them before they were penned?
Sounds that make you Shiver, Over and Over, Night Warning, Phantasm, Dead of Night, Sounds Familiar. I wrote all of these songs Lyrics and Music, all were influenced by Horror movies and Old TV shows. Very happy with the outcome, but you always want to go back and change things to make it better.

Is the EP exclusively available on streaming/digital format, or is it also out on CD? Which format do you think will provide the most publicity for the band?
The Music is on all the main social outlets, we are a DIY Band so if anyone wants to purchase Cd’s you can email us on Facebook to purchase a copy of “Sounds That Make you Shiver” I really think that the most publicity will come from people discovering us the old fashioned way, Word of mouth.