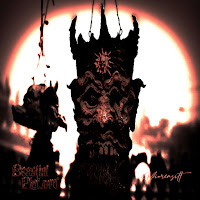 Band: Beastial Piglord
Location: Kinston, North Carolina
Country: USA
Genre: Extreme metal
Full Length: Viorensilt
Label: Slorebs Castle Records
Format: Digital (streaming on Bandcamp and Youtube)
Release date: April 26, 2020
Hudson Conner continues to record Beastial Piglord material at an alarming rate. It’s only April and “Viorensilt” is his sixth full length release this year. Every time I listen to a new album by this project it sounds different from the last. But I think Hudson is not so much trying to redefine his work or extreme music as he writing what he feels at any given time. Which is not to say his writing overall is not innovative, because in doing so he creates something honestly diversified, distinctive and unpredictable. For this recording he wanted to compose doom metal and stoner rock-oriented songs with more groove and more of a circumscribed guitar sound. There are even intermittent hints of early grunge from before the genre was milked dry. Given Hudson’s penchant for experimental noise, distortion and subtle effects “Viorensilt” is not what you’d expect to hear from a metal band. “Viorensilt” was released a day or so ago and I can already tell it has its own temperament. The song structure is a little more orderly than I remember from "Pulling a Thread from the Fabric of the Universe," "Disourminth" and "Cosmicism and Neuselore" with the same random changeability of those releases. From the cover artwork conceptualized and designed by Cross to “The High Priestess” which opens the album, you’re looking at the world as its habitually envisioned by Conner, through a black light filtering out brightness and ebullience. Leaving a gloaming twilight made all the more prodigious and inconsolable by repetitive, almost mechanical, songwriting, creepy spoken word, bellowing howls, reverberating echo and grating production. More than just being doom and stoner at its most elementally primitive, it expresses suffering and wrath at its most rudimentary and visual. It’s a vision of the underworld in which everything is inanimate and lifeless, and what was once thriving in the corporeal world is now crumbling and decomposing to dust. Nothing burns here since there is no matter that can be consumed by fire. This is where the darkness of “Viorensilt” is generating from, and again, you have to play it loud to fully feel the intended effect. –Dave Wolff